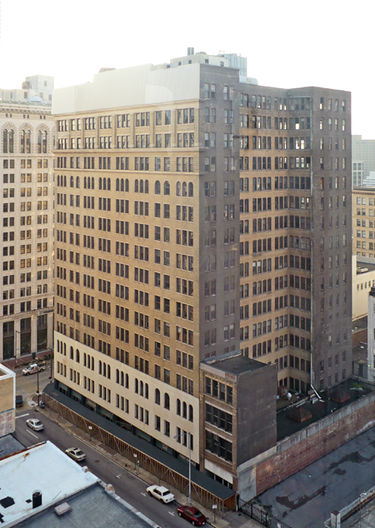 The Brown Mark Building in 2008

The Brown Marx Building (or Brown Marx Tower) is a 193,000 square foot, 16-story, 210 foot tall Chicago-style steel-frame office tower on the northeast corner of 20th Street and 1st Avenue North. From its completion in 1906, until it was eclipsed by the Empire Building three years later, it was the tallest structure in Birmingham.

The site of the Brown Marx Building was where Charles Linn built the National Bank of Birmingham in 1873. Known as "Linn's Folly", the building hosted Birmingham's first Calico Ball.

The Brown Marx Building was named for Otto Marx of Marx & Company and Eugene L. Brown of Brown Brothers, early tenants of the structure. (The alternate name, The Eugeneotto Building, was rejected early-on). It was built in two phases beginning with a narrow 16-story tower on the corner (pictured), which was completed in 1906.

The immediate success of that development encouraged iron magnate William Woodward to purchase the building and more than double its overall size over the next two years. His 1908 expansion created a U-shaped plan with an average of about 12,000 square feet per floor and windows providing natural light to every office. A four-story Brown Marx annex was constructed just east of the tower facing 1st Avenue. Its ground floor was leased as an independent space while the upper floors connected with the tower. 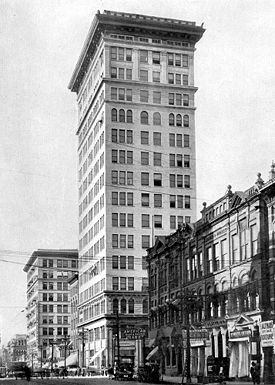 The original Brown Marx Building in 1906

The building was financed by the Tennessee Coal Iron and Railroad Company. Both sections were designed by architect William Weston and constructed by John Griffith & Sons of Chicago, Illinois.

The exterior of the building was light-colored brick with rusticated banding and arched windows on the third story, surmounted by a cornice. The ground floor was clad in stone with broad expanses of glass showcasing retail goods. The interior was clad in Alabama marble, and the roof parapet was surrounded by a broad, highly detailed cornice. Most of these details have since been removed. As early as 1930, when the building was again expanded, the rusticated story was covered over with a more "streamlined" art-deco inspired light-colored banding.

In 1951 U.S. Steel (which had absorbed TCI) moved their Birmingham headquarters from the Brown Marx to the new Flintridge Building in Fairfield. A pool hall was located in the basement for a while. Other tenants included the Southern Building Code Congress. The cornice was removed and replaced by a metal-clad mechanical enclosure at the roofline in the early 1970s. In the 1980s, the building was owned by the Gittlin Companies of Fairfield, New Jersey.

Attorneys Percy, Benners & Burr, who counted TCI among their clients, kept offices there.

Watts Realty managed the Brown Marx Tower from 1974 until its sale to a new owner in the early 1980s. The realty company relocated its offices to the Arlington Business Center in 1984.

Henry Sprott Long & Associates occupied offices in the 16th floor until moving to Lakeview in the early 1960s.

In 2002, Inman Park Properties purchased the Brown Marx Building along with the Empire Building across 20th Street and the Commerce Center at 1st Avenue North and 21st Street. The following year they proposed to convert the Brown Marx into over 100 loft apartments, perhaps in tandem with the Empire Building. In advance of the planned renovation they moved most of Brown Marx's tenants to the Commerce Center. Unable to negotiate a deal with the Birmingham Parking Authority to build a new deck adjacent to the site, they abandoned the renovation.

In 2004 Operation New Birmingham put it on their 12 Most Wanted list of downtown buildings in need of renovation.

In 2006 SAW Holdings LLC, a group of local investors led by former Pride Restaurants owner Arnold Whitmore announced places for a $22 million renovation of the building, including 108 condominiums, a roof-top pool, gym, spa, a top-floor bar, an executive office suite, and ground floor restaurant, office and retail space. The proposal included a 200-space parking deck to be built adjacent to the tower. RealtySouth and Nationwide were jointly marketing the condominiums and opened sales office in the building.

Falling glass from upper-story windows caused the Birmingham Department of Planning, Engineering & Permits to require the owner to protect the sidewalks with covered walkways which were installed in September, 2006. In 2009 part of the metal facade came loose during a strong windstorm. The city entered into an emergency contract to remove the metal in the interest of public safety.

In March 2012, National Bank of Commerce sold the building to Hughes Capital Partners. They opened an office in the adjoining Brown-Marx Annex as they considered possibilities for redevelopment. In 2017 they removed the decade-old sidewalk covers to clean up around the building.

In January 2018 an LLC affiliated with Ascent Hospitality, developer of the Elyton Hotel, purchased the Brown Marx Building for $3.66 million. The company carried out some clean-up and stabilization work during 2019, but made now announcements concerning future plans.