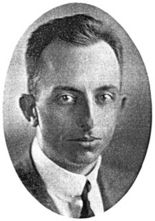 George Palmer Turner (born 1896 in Birmingham; died 1984) was an architect, best known for his Mission-style designs for the first homes built in the Hollywood residential development.

After finishing high school in Birmingham, Turner spent two years working with Warren, Knight & Davis. Inspired by the profession, he decided to pursue a university degree and traveled to the University of Pennsylvania where he won numerous medals on his way to graduating from the architectural design course with honors. After graduating, he had the opportunity to spend time in France studying at the École nationale des beaux arts de Dijon and traveling between Paris, Versailles and the Riviera making sketches of landscapes, chateaux, palaces, townscapes and Classical ruins.

He returned to Philadelphia where he took a position with the office of Clarence Wunder, who assigned him to the interior decorations of the Pennsylvania Hotel. He left Wunder to become the interim chief designer for the firm of Simon and Simon, and stayed on as assistant when Grant Simon returned from his European tour. While there he worked on the Fidelity Trust Building and several other notable projects.

In the early 1920s, Turner was convinced by his friends from Birmingham to return to the city to open a practice. He did so in partnership with a man named McPherson in 1924. The company's offices were in the Martin Building in 1928. Turner then practiced in partnership with Edward Slater, with offices in the same building, in 1930.

During an early meeting with Clyde Nelson, the developer of Hollywood, Turner showed some watercolor sketches of houses in Coral Gables, Florida which impressed Nelson and won him the job. Through that commission he was able to produce homes for some of Birmingham's prominent families, including residences for Charles L. Ireland and John Harbert Jr. he also gained publicity by designed the "Age-Herald Show House" for the Birmingham Age-Herald newspaper.

Turner later partnered with S. R. Batson in the firm of Turner & Batson.

In later life, Turner focused on painting and music. He won a Fogarty Award in 1968 for his efforts to encourage businessmen to take up art as a hobby.