From Bhamwiki
(Redirected from McElwain Furnace)
Jump to: navigation, search 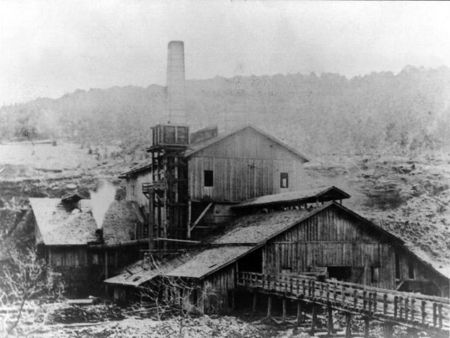 The Cahaba Iron Works (also known as Irondale Furnace or McElwain Furnace) was a blast furnace operating from a site alongside Furnace Branch of Shades Creek in present-day Mountain Brook from 1864 to 1871.

Wallace McElwain was a New York machinist and foundryman who moved to Holly Springs, Mississippi in 1859 to help his uncle launch a cast iron foundry. The business was contracted by the Confederate States of America to supply cannons and small arms. As Union forces approached his Mississippi foundry, McElwain began scouting Jefferson County, Alabama for a more secure site.

McElwain, with the backing of W. A. Jones, purchased an 800-acre parcel from Willis B. Eastis on February 22, 1863 and later added property bought from John S. Poole, Obadiah Wood, and Henry Shackleford until he controlled 2,156 acres extending from Spring Valley Road, Westbury Road, and Cherokee Road on the south to Red Mountain on the north and from Montrose Circle on the west to Brookwood Road on the east. Those holdings provided hardwood timber for charcoal as well as limestone and Red Mountain iron ore, mined at Helen Bess Mine, which was linked to the furnace site by a tramway.

The base of the furnace was built of stone while the upper portion was laid up in brick bound with iron. The furnace stack rose 41-foot tall. The furnace could produce up to 10 tons of iron per day. The iron was cast into pigs and loaded onto ox carts for the 20-mile trek down Montevallo Road and present day Hollywood Boulevard and Oxmoor Road, past Shannon to Brock's Gap through Shades Mountain, and loaded there onto the Selma, Dalton & Rome Railroad for transport to the Confederate arsenal in Selma.

The 500 or so laborers and supervisors who operated the furnace established the community, known generally as "Irondale", and later, more specifically ,as "McElwain". The Beaumont House, which McElwain used initially as his residence, was converted into a commissary to supply the day-to-day needs of the community.

McElwain had just begun experimenting with coking coal instead of charcoal as fuel when the furnace fell to the Union Army. In late March 1865 scouts for Wilson's Raiders located the furnace operation. A division of Wilson's force, led by Brigadier General Emory Upton with officers from the 4th Iowa Veteran Volunteers arrived on March 29. They occupied the furnace commissary while their troops demolished the stone furnace and dismantled with wooden tramway connecting it to the mines.

Immediately following the South's surrender at Appomattox, McElwain traveled to Cincinnati to secure the funds needed to rebuild, which he did. The furnace was rebuilt and began operating again in 1866, providing a rare opportunity for gainful work among those left without means by Reconstruction. The workers were called to their shifts by an unusually large whistle, dubbed "Big Jim" which sounded across the valley.

Over the next five years the price of iron declined as competitors began operating. McElwain's health was also beginning to fail, and on May 16, 1871 he and his partners sold the business to the investors in the new Jefferson Iron Company. Company officials lobbied the Alabama State Legislature to enact a local liquor law in December 1871 which prohibited the sale of spirits, "within two miles of the Irondale Furnace".

The furnace was idled during the Panic of 1873, and was sold again in 1876 to Joseph Johnston. The Georgia & Pacific Railway established a depot two and a half miles away in 1883, which became the new center of Irondale. The community was incorporated in 1887.

The site of the former iron furnace is now the centerpiece of Mountain Brook's Irondale Furnace Trail.