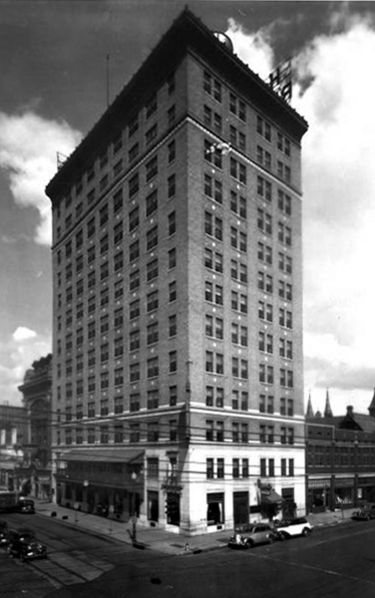 The Redmont in 1939. courtesy BPL Archives

The Redmont Hotel (sometimes Hotel Redmont) is a 14-story (160 foot) tall, 120-room1. hotel and conference center located at 2101 5th Avenue North, on the corner of 21st Street North (Block 58). The Redmont, named after Red Mountain, is the oldest hotel in Birmingham still in use. It is currently owned by Bayshore Asset Management of Tampa, Florida, which purchased the property in 1999.

The Redmont occupies the site which formerly housed the First Christian Church. It was developed for the Dinkler Hotel interests of Atlanta, Georgia (Louis J. Dinkler, his son Carling L. Dinkler, and banker Henry C. Heinz), along with Birmingham investors Phares Coleman and Frank Spain. The 250-room hotel was constructed by the Smallman & Brice Company to plans drawn by architect G. Lloyd Preacher of Atlanta. It opened to guests on May 1, 1925, with a public grand opening on May 9.

Preacher designed the brick and terra-cotta clad tower in an interpretation of the "Chicago style", dividing the height of the building into a base, a shaft, and a "capital". The base and cap are more richly detailed in cream-colored terra cotta with Classical details in low relief. A metal balcony across the central bays on the north side (facing 5th Avenue), protects the main entrance and is accessible from reception rooms on the second floor. The decoration of the red brick middle section is more restrained and expressive of the building's structural frame. Most of the windows are paired and linked into vertical bands with decorative spandrel panels. The corners are visually strengthened with smaller windows and no spandrels.

The two-story lobby atrium is surrounded by a mezzanine level which gives access to dining and meeting rooms. Above the mezzanine are 11 floors of guest rooms (3 through 14, skipping 13), and a penthouse. The floor layout was unusual for its time in that each guest room had a private bath as well as chilled water and electric fans. The Redmont Hotel was advertised as "Birmingham's Most Modern Hotel" well into the 1930s under manager Frank M. (Pete) Woods.

A robber was killed and his partner wounded in a shootout at the Redmont Hotel on November 1, 1934. They pair, on the lam from a robbery in Tampa, Florida, were caught in the act of attempting another robbery on the hotel's 8th floor by Birmingham Police Department detective A. C. McGuire. He chased them to the lobby and was struck in the arm by one of their bullets during the fight.

The Rainbow Room lounge debuted in 1937 and became the watering hole for an informal group of influential persons called the "Knothole Gang". By 1945, under hotel manager Lewis Whitten, it was operating as the Rainbow Coffee Shop. The restaurant offered a $1.50 fixed price Thanksgiving meal that year.

In 1946 the hotel was purchased by Clifford Stiles of the Stiles Brothers hotel chain. He added a penthouse apartment on the roof for himself and his family in 1947. During construction, John Booth, a prison trusty at the Jefferson County Jail noticed smoke on the roof of the hotel and notified authorities, who were able to confine the blaze to a storage room. W. A. "Doc" Gutridge was manager in 1948. Some say that Stiles, who died in 1972, still haunts the building.

In 1951 the hotel's ballroom hosted numerous visiting celebrities who performed with the Theatre in the Round during its sole season. In 1952, singer Hank Williams spent his last night in the Redmont on an uncompleted trip from Montgomery to Charleston, West Virginia. One of the suites earned the moniker "the Lucky Governor's Suite" when it served as the local headquarters for the successful Jim Folsom and George Wallace gubernatorial campaigns of the 1960s. Alec Gulas' Blue Note Lounge night club featured exotic dancers. The Red Room bar was known to be gay friendly in the late 1960s and early 1970s.

During the next decades the building came to be used as housing for elderly residents. The building, suffering from decades of neglect, was added to the National Register of Historic Places in January 1983.

The Redmont Hotel was purchased in 1983 by Hospitality investments, an investment group which included several NBA players, including Kareem Abdul-Jabbar and Ralph Sampson. The players were never personally involved in the project, which was overseen by agent Tom Collins and an associate, Kirk Hyde.

The new owners immediately began a $7 million renovation project. Architect Neil Bruce of Bradford & Bruce Associates cut the number of rooms from 240 to 110 as part of a complete structural reconditioning. The mezzanine balcony was re-opened and the exterior walls were repaired and restored. A new styrofoam cornice was installed in place of the deteriorated terra cotta.

Angi Grooms Proctor of Southeastern Interior Concepts designed the room interiors while Howard Tutwiler of Tutwiler Design Associates handed the lobby, restaurant, and bar, as well as the newly-created basement meeting rooms. Both designers employed traditional styles rather than the contemporary boutique style originally envisioned by the ownership group. The awning over the doors was bedecked with the flags of the United States, Canada, Germany, France and the United Kingdom.

When Kareem Abdul-Jabbar visited Birmingham after the renovations were completed, he stayed in the presidential suite, with a twin bed rolled up to the foot of the regular bed to accommodate his height. Not long afterward Abdul-Jabbar fired Collins and sued him for mishandling his money.

The Redmont lost its affiliation with the Holiday Inn chain in 1998.

In August 1999, the hotel was sold for $1.9 million to Bayshore Asset Management of Tampa, which created Bayshore Redmont Inc. as a holding company. Bayshore development principal Bob Rygg announced plans to spend as much as $2.5 million on updating the hotel with new finishes and technology, cleaning the exterior, and possibly adding a ballroom in an adjacent building owned by the Partnership Assistance to the Homeless (PATH). The hotel was also rebranded as the Redmont Crowne Plaza when it reopened in 2001.

In April 2006 Bayshore announced plans to convert 20 guest rooms on its two uppermost floors into eight 1- and 2-bedroom condominiums with another luxury condominium in the 2-story penthouse. The hotel's name was changed to the Redmont Hotel & Residences and its association with Crowne Plaza was dissolved. The remodeling was put on hold in November of that year, however, due to lack of interest.

In 2008 the Redmont's general manager, Georgian Fortunado, announced plans for a $1 million renovation which would include adding a rooftop tapas bar, converting the 2nd floor dining area into meeting space and building a bar and bistro at ground level. Bayshore's Jim Lewis bought out his partners in 2008, A year later, the hotel replaced its penthouse suite and fitness center with Above, a rooftop bar. Maxus, Inc. performed that work, which was designed by Israel & Associates architects.

In 2014 the Redmont began a $20 million upgrade project financed in part with Alabama Historic Rehabilitation Tax Credits and supported by $400,000 in tax incentives from the City of Birmingham. Interior designer Natalie Toy was commissioned to plan the renovations. The work, contracted to Stewart Perry, included completely updating all guest rooms, adding a new independently-operated restaurant and bar, along with a café. The hotel reopened in Summer 2015 as part of the "Curio Collection by Hilton".

Hay Creek Hotels had been slated to manage the renovated property, but their partnership with the owners was terminated. A new company, Rhaglan Hospitality, was formed to develop and operate the hotel. The remodeled property opened on March 8, 2016 with a fully-booked weekend for the 2016 Conference USA Men's Basketball Tournament.