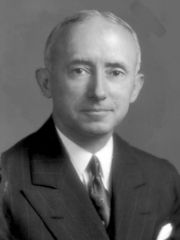 Thomas Wesley Martin (born August 13, 1881 in Scottsboro, Jackson County; died December 8, 1964 in Birmingham) was president of the Alabama Power Company from 1920 to 1949 and chairman of the board until his death. He was also a major force in the state's economic development and one of the founders of the Southern Research Institute.

Martin was the son of Attorney General of Alabama William Logan Martin and his wife, the former Margaret Ledbetter, both from families long settled in Madison County. He was born in Scottsboro and raised in Montgomery where he attended Starke's University School before entering the University of Alabama to study law in 1898. He was admitted to the Alabama State Bar on December 5, 1901 and practiced in his father's firm, under Massey Wilson. He served as an Assistant Attorney General of Alabama beginning in 1903 and helped to write sections of the Code of Alabama dealing with dam construction.

In 1911 Martin was hired by Massachusetts engineer James Mitchell to provide legal services for the development of a dam on the Coosa River. Mitchell purchased the rights to the dam site from Alabama Power's William Lay, forming the Canada-based holding company Alabama Traction, Power & Light, Ltd with Martin as its general counsel. He oversaw the acquisition of other sites suited for hydroelectric power, and also of smaller companies developing dams in the state. The company moved its headquarters offices to Birmingham in 1912.

When Mitchell died in 1920, Martin succeeded him as president of Alabama Power. He began developing electrical service to rural areas, funded a hydrology research laboratory, and planned the Mitchell Dam, which was completed in 1923, followed by a flurry of others. The development of these dams was a key factor in the development of electrical power service, but was also blamed, at the time, for an increase in mosquitoes. Martin reached out to Surgeon General William Gorgas to dispute the claims of property owners attempting to sue the utility, and all the cases were dropped.

Over the following decades, Martin became a leading figure in the state's economic development efforts. He established connections with power utilities in Georgia that led to the formation of Southeastern Power & Light, and founded Mississippi Power, Georgia Power, South Carolina Power and Gulf Power companies as divisions of the holding company. When Southeastern Power & Light was acquired by investors and merged into Commonwealth & Southern, Martin served as its first president until 1932.

In the late 1930s, Martin lobbied for the development of military bases and defense-related industry in Alabama. After World War II he led efforts to convert those facilities to peacetime production. These efforts also included the formation of the Southern Research Institute in Birmingham in 1944, which he hoped would help close a gap in research and development between the South and North. Alongside a second wave of new Alabama Power dams on the upper Coosa and Warrior Rivers, Martin chaired the first Alabama Chamber of Commerce.

Martin was also an amateur historian. He compiled several books on Alabama history. In 1913 he convinced his mentor, James Mitchell, to move a proposed dam that would have subsumed the Horseshoe Bend site. In the 1950s he successfully lobbied the creation of a military park on the site to commemorate Andrew Jackson's victory over the Creek Nation.