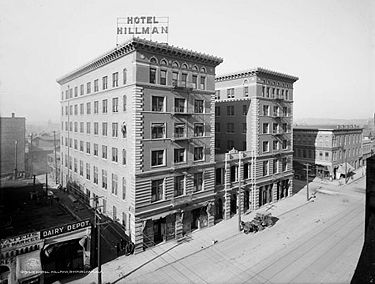 Hotel Hillman (commonly the Hillman Hotel) was a luxury hotel located on the southwest corner of 4th Avenue North and 19th Street, across from Birmingham City Hall. It was constructed in 1901 by the Hillman Hotel Company, which had been formed the previous June by Thomas Molton, Benjamin Roden and M. V. Joseph. Leo Steiner joined later and succeeded Roden as vice-president. The hotel was named for Tennessee Coal, Iron and Railroad Company vice president T. T. Hillman.

The six-story Renaissance Revival-style hotel was designed by Stone Brothers, Architects of New Orleans, Louisiana (also involved in the Woodward Building). It was arranged in an H-shape with the courtyards filled on the first and second floors for the lobby and ballroom spaces. Over the entrance, the date was inscribed as "MDCCCCI". The rest of the ground floor was filled with barbers, shoe repair shops and cafés, including P. H. Linnehan jeweler and optician, and Bearmen's Mens Clothes. Projecting brick bands marked the lower floors, while quoins distinguished the corners of the upper levels. The attic story was lit with arched windows and shaded by a deep cornice.

Completed in October 1901, the Hillman was the city's premiere hotel until the completion of the Tutwiler Hotel on 20th Street in 1914. Among the hotel's innovations was its use of a prototype Lansden electric wagon to carry guests and their luggage back and forth from Union Station four and a half blocks away.

On September 12, 1907 the Hillman hosted the first annual banquet of the Caterers of Alabama. The Hillman's chef,a Mr Williams, prepared a main course of planked black bass for the group.

The hotel building was demolished for parking in 1967. The original drawings are housed in the Southeastern Architectural Archive at Tulane University.