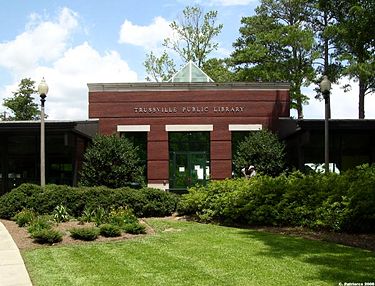 The Trussville Public Library is located at 201 Parkway Drive and has been a member of the Jefferson County Library Cooperative since 1978.

The first library in Trussville was established in the late 1930s with the completion of the Cahaba Homestead Village. The first public library was in the current Hewitt-Trussville Middle School, then the high school, with Jean Glenn serving as the volunteer librarian.

From this location the library would move to the Cahaba Management Office and Heritage Hall before the current building was constructed in 1965. From its beginnings of a single volunteer, the library now has a staff of fourteen.

Expansions of the existing building first occurred in 1988 with the addition of a children’s room. A second major expansion occurred beginning in 1996 resulting in its temporary closure and relocation to the neighboring John C. Yarbrough Community Center for the duration of construction. Construction was complete by November 1997 with its rededication occurring on May 17, 1998.

Construction on an expansion into the footprint of the Yarbrough Community Center began in September, 2015. The expansion includes a 250-seat auditorium, administrative offices, a Friends of the Library bookstore and meeting rooms. The library itself was temporarily closed in 2017 and the building with the expansion reopened in April 2018.