Hueytown High School is a four year public high school in the Jefferson County School System which primarily serves the city of Hueytown. It is located at 4881 15th Street Road. The school was founded in 1921 and currently has an enrollment of 1,032 students.

The school's colors are purple and gold, and the teams are nicknamed the "Golden Gophers".

Hueytown High School held its first classes beginning February 25, 1921 in a white-stuccoed building at the corner of present-day Allison-Bonnett Memorial Drive and High School Road. Previously, 66 students in Hueytown, Concord, Pleasant Grove and several other communities had to make the long trip to Bessemer High School every day. 25 seniors made up the school's first graduating class of 1922.

The first principal was Harley Gilmore, who held the job, as well as the role of athletics director, until he retired in 1956. Hueytown High played its first football game against Jefferson County High School on September 30, 1921, losing 41-0. The next week they defeated Alliance High School 9-0. Hueytown's 1933 football stadium, built with WPA labor, is named for him and Melvin Vines.

In the first years, Gilmore and a staff of five teachers instructed students in French, Latin, chemistry, mathematics, history, home economics and woodworking. Students also participated in debating societies and in theater productions. Clapboard wings and a second story were added to the school in the 1930s. A gymnasium was constructed about 1940. 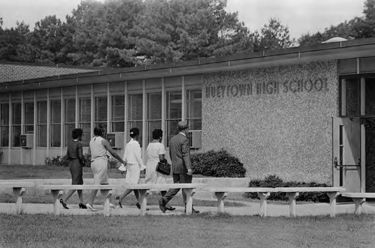 A group of African American students enter the newly-integrated Hueytown High School on September 1, 1965. Photo by Ed Jones for The Birmingham News.

After Gilmore's retirement, the principal's office was occupied by Charles Vines. The new campus at 131 Dabbs Avenue was completed in fall 1958 while the old building was converted into W. I. Pittman Junior High School, until it was finally closed in the late 1960s and the building demolished in 1972.

In 2009 the Jefferson County Board of Education solicited bids for the construction of a new Hueytown High School on a 108 acres campus off 15th Street Road. The $37 million building accommodates 1,200 students with a 100-seat lecture hall, 650-seat auditorium, 1,600-seat competition gym and a performing arts center and dance studio. The new school opened for classes in the fall of 2011 and its completion was celebrated with a ribbon-cutting on January 18, 2012.