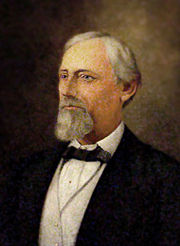 Cobb was born to John W. and Catherine Leak Cobb on a plantation in the vicinity of Ashville in St Clair County. He was educated at an academy in Ashville and graduated from the University of Tennessee, at Knoxville in 1850. That same year he married the former Margaret McClung of Knoxville, with whom he had two children, John W. and Dora.

Returning to Ashville, he read law in the office of John C. Thomasson and was admitted to the bar in 1855 . He practiced law in St Clair County until he moved to Shelby County in 1867 and became a law partner of B. B. Lewis.

When the Civil War began in 1861, Cobb joined the Confederate Army as Captain of Shelby County forces in Company C, 10th Alabama Infantry Regiment, J. H. Forney's brigade, which was organized in Montgomery on June 4, reporting to Virginia a month later. In 1863, Cobb was assigned to General Joe Wheeler's cavalry in Tennessee and placed in command of a scouting party. At the end of the war he resumed his law practice in Marion, Perry County. His wife, Margaret, died in 1865. He was remarried, a year later, to Fannie Fell, and fathered two more children, Richard C. and Edith.

In 1868 Cobb returned to Columbiana, then moved to Helena in 1873. He was elected to the Alabama State Senate in 1872 and in 1876 to represent a district comprised of Shelby and Bibb Counties. He served as Shelby County's delegate to the 1875 Constitutional Convention. During his term in the senate, he collaborated with Peter Hamilton of Mobile on a plan for readjusting the state debt, a plan subsequently adopted by the legislature. Cobb was a friend and advisor of Governor George Houston.

Cobb himself was elected governor in 1878 and reelected in 1880. "He had a quiet administration, without striking events." (Owen, p. 357) The population of Alabama was growing, by 1880 the federal census recorded 1,262,505, and the problems of administrative finance and control of the railroads fell to Cobb. "His administration made improvements in tax assessment and reduced the cost of surplus in the state treasury." (Stewart, p. 127)

Also during Cobb's two terms, the State Railroad Commission, the State Bar Association, and the Tuskegee Normal and Industrial Institute were created. The records of Governor Cobb's administration reflect that a major controversy during his last term was prohibition. The prohibition forces attempted to pass a statewide local option law but were unsuccessful.

After his term as governor had expired, he retired to private life for a time, but in 1888 accepted the appointment to the office of probate judge of Shelby County. Cobb also served as president of the Central Iron Works at Helena from 1873 to 1891; was an attorney for the Louisville & Nashville Railroad; and was involved in cotton planting and in developing an iron mine, the Delmar mine, in northern Alabama.

Cobb belonged to all the branches of the York Rite Masons and was grand master of the Grand Masonic Lodge of Alabama in 1879 and 1880. He was the only man who was grand master and governor at the same time. He was a member of all the lodges of the Scottish Rite Masonry up to and including the thirty-second degree.

In 1896 Cobb came to Birmingham, where he shared a residence at 6230 1st Avenue North in Woodlawn (now under I-59/20) with his daughter, Edith, He died there a few days after injuring his hip in a fall in November 1913. Funeral services were held at the house. Cobb was buried, with fellow past Grand Masters as pallbearers, at Forest Hill Cemetery.