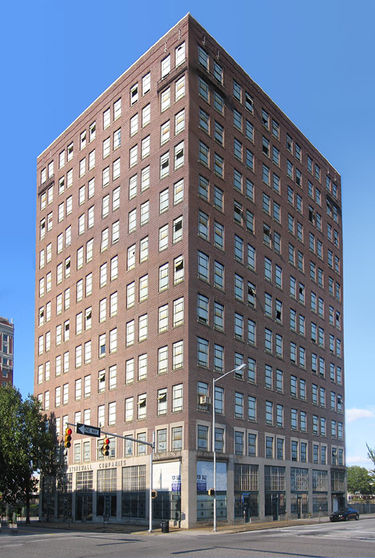 The American Life Building from the southwest. Photographed October 2006

The American Life Building, also known as the Stonewall Building, is a 12-story, 84,000 square-foot apartment building on the northeast corner of 23rd Street and 4th Avenue North. Its entrance is located at 2308 4th Avenue North.

Originally an office tower, the building was constructed as the Doctors Building or Martin Office Building. It opened in April 1925, just in time to house the Birmingham City Commission and other departments after the destruction of the former Birmingham City Hall by fire. The architectural firm of Turner & McPherson had offices on the 12th floor.

The property was sold in 1946. In March 1947 the FBI Birmingham Division moved into the Martin Building, where it remained until moving to the 2121 Building in December 1962.

The building became the headquarters of the newly-formed American Life Insurance Company, and became known as the "American Life Building". Later, American Life acquired the Stonewall Insurance Company of Mobile and moved its headquarters to Birmingham in 1967. It remained the lead tenant of the renamed "Stonewall Building" until 1979, after which the offices and retail spaces were gradually vacated. The building's owner declared bankruptcy in 1983 and the property went into trusteeship.

The structure found a use as a document storage facility until about 2000. In 2004 Operation New Birmingham put it on their 12 Most Wanted list of downtown buildings in need of renovation.

A 2004 plan to convert the building into 48 condominiums for $4 million was never accomplished, though a project to remove asbestos from the structure was completed in 2006. The building is currently owned by brothers Leo and Ed Ticheli who in 2008 planned to convert it into 71 apartments. The schedule for the project was dependent on the housing market and completion of the Tichelis' redevelopment of the Massey Building and Jackson Hotel (former home of the Jimmie Hale Mission) properties, which they also owned. The American Life project was expected to cost about $10 million, when it stalled out during the economic downturn of 2008-2009.

In 2013 another proposal, from Minneapolis, Minnesota-based Dominium, projected a $10 million renovation to provide 65-70 "artist" apartments in the building.

In 2018 Ed Ticheli renewed his redevelopment proposal for the building, planning 137 affordable "workforce" apartments, ranging from $600 to $900 per month for rent. Five units were made availble for use by the Dannon Project. The proposal was awarded a $182,182 tax credit under Alabama's Historic Preservation Tax Credit program, with an additional $2.9 million request awarded in 2019. The Birmingham City Council approved $421,585.99 in economic develpment incentives for the project. LMS Real Estate is managing the property.

The $23.4 million project was financed by PNC Bank, mainly through a wholly-owned investment fund targeting projects in Opportunity Zones. Hendon & Huckestein prepared the architectural design for the renovation, which was carried out by Wyatt General Contractor.

The apartment complex is scheduled to open in late 2020.