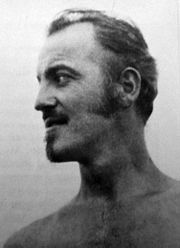 Beatty was the son of Isaac Beatty, Jr and Hughie Duffee Beatty. He began his flying career as a teenager by soloing a small plane he constructed himself with a motorcycle engine at his grandfather's farm in Tarrant on June 16, 1916. The flight ended with a crash landing. Not long afterward he designed and constructed a hand-powered submarine which he sank in Edgewood Lake.

After a year at Marion Military Institute, Beatty got permission from his father to enlist in the Navy at age 17. He was sent to the Navy Radio School set up at Harvard University. In 1919 the United Fruit Company hired him to construct and install wireless (radio) telegraphy equipment along its steamer routes in Asia. He reportedly constructed the first voice radio station in China during that engagement.

After returning to Alabama, Beatty joined James Meissner and a few fellow aviators including Jerry Thomas, John Donaldson and Sumpter Smith to form the Birmingham Flying Club in 1919 at Roberts Field. The unit was recognized as the 135th Observation Squadron, the state's first Air National Guard unit, on January 21, 1922. Beatty qualified as a military pilot at Maxwell Field in Montgomery and, in 1924, was commissioned as a 1st Lieutenant in the U. S. Army Air Corps.

In 1921 Beatty, a "radio expert" for the Matthews Electric Company, constructed one of Alabama's first experimental voice radio stations, called WIAG, on the second floor of their building on the 200 block of 1st Avenue North. He used the station to broadcast weather reports to the few receiver-equipped pilots in range and had his flying student and girlfriend Mary Alice Gatling play the piano in the broadcast booth (likely the first live broadcast of music in Alabama). An improved radio circuit Beatty developed for the station was the subject of his first U. S. patent, awarded in 1922. He was inducted into the Order of Quiet Birdmen in 1927.

In early 1929, Beatty was flying with radioman Robert Snapp over central Alabama when the cable to his tail rudder snapped. Rather than ditch the plane, as military procedure dictated, Beatty held the plane steady while Snapp climbed out over the tail and manually straightened the rudder. He made a successful emergency landing at Maxwell Field in Montgomery. He was commended by Governor Bibb Graves for his heroism and nominated for a Distinguished Flying Cross.

That same year, Beatty recruited Hugh Morrow, William Siebert, Sam King, Victor Hanson and Henry Sims, along with a few New Orleans business figures, to jointly finance a trade delegation by air to South America. He would serve as director and pilot with Robb C. Oertel as co-pilot, Leslie Walker as navigator, and Martel Brett, a Birmingham Age-Herald reporter, as historian. Hopes for the flight, which were widely publicized, were dashed by the October 1929 stock market crash.

In 1931 Beatty re-launched his ambitions for an expedition to South America, adding the enticement of exploration of the interior of the continent to his plans. He secured the cooperation of Major Leslie Barbrook of the National Geographic Society and William Stirling, chief ethnologist for the Smithsonian Institute, and approached J. P. Morgan for financing. With a $25,000 check in hand he attended the christening of the "Simon Bolivar" amphibious airplane at Roosevelt Field in New York on October 18 of that year.

With the scientists having preceded them by steamship, Beatty assembled his flight crew, which included his wife, Mary Alice, who had by then become an experienced aviator. She remained in Santiago as the explorers continued into the interior on foot.

Months of privation in the jungle were punctuated by careful movements across tribal boundaries into Ecuador. The group made the first photographs and motion-picture recordings of the native Jivaro (Shuar) people, known as head-hunters. A miscommunication about the team's desire to record the shrinking of a monkey head resulted, to their horror, in them witnessing the process performed on the head of their former packbearer, Sunga. Beatty occassionally used his radio equipment and Stirling used a kit of chemical substances to awe and frighten the natives. Eventually the expedition boarded rafts for the long journey down the Amazon.

In addition to their photographs, the expedition collected numerous artifacts and live animal specimens. A "tiger cub" (jaguar) sent by Beatty to his 6-year-old daughter was soon turned over to the Birmingham Zoo at Avondale Park, where it was found to be particularly uncooperative with the public. The success of the expedition led to Beatty's induction as a "fellow" to both the Explorer's Club of New York and the Royal Geographical Society.

Pan-American Grace Airways (Panagra) recruited Beatty to lead the search for a downed plane in the Andes. He piloted a Fairchild Model 71 monoplane wearing an early pressurized flight suit for his hundreds of search flights over the mountains. The site was buried in snow throughout Beatty's search and finally found by natives after an unusually warm summer.

Nevertheless, his experience and the geographical and detailed flight information he recorded allowed Beatty to develop air routes and safety practices for commercial flights across the mountains. He constructed the first-ever system for air-to-ground voice communications and his recommendation for pilots to report their grid-square location at 5-minute intervals was widely adopted and is credited with saving many lives. Another recommendation to vary routes seasonally to avoid dangerous climate conditions was also instrumental in making commercial flights viable in mountainous regions.

In 1933, while Beatty was piloting a Panagra passenger flight from Los Cerillos airfield in Santiago through the Uspallata Pass, a sudden strong wind (clear-air turbulence) carried the craft above 26,000 feet, setting an altitude record for a passenger flight in an unpressurized cabin. The passengers and crew used breathing tubes connected to oxygen tanks, but when the incident prolonged the flight, the oxygen was reserved for the crew only, causing the passengers to lose consciousness. The pass is sometimes called "Beatty Pass" in recognition of his development of the route.

In 1935 Beatty, piloting a Sikorsky S-43, set a speed record for a flight between the continental United States and the Panama Canal Zone.

In 1938 Beatty was forced to land a Panagra amphibious flight in the Pacific Ocean after his equipment was damaged by a lightning strike. He landed successfully and dropped anchor. After receiving fuel and supplies from another seaplane, he successfully took off in the rough seas and completed the flight. 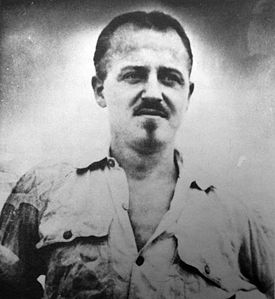 In 1939 Beatty returned to the United States as the appointed a Senior Air Safety Investigator for the Civil Air Authority. He reported for duty in Santa Monica, California on July 1, 1939 and made reports on all non-military aviation incidents in the western states.

Before World War II, Beatty accepted an offer from the Consolidated Aircraft Corporation of San Diego, California to direct its flight testing and delivery operations worldwide. The program he set up in 1941 between California and Australia was designated "Consairway" and, using precautionary protocols Beatty initiated, the civilian-manned program suffered no losses in its hundreds of flights across enemy-controlled seaways. Consairway rapidly expanded into a major ferrying operation which delivered flight crews and material to combat zones. Beatty invented the use of barometric readings to adjust flight paths en route over the Pacific, now a standard fuel conservation practice. His training of pilots from experience in mountainous terrain proved especially critical in the Pacific theater as air routes over the Himalayas were the only means of getting freight into China.

Meanwhile Beatty himself relocated from his Mountain Brook home to Elizabeth City, North Carolina to oversee Consolidated's modification of aircraft for leasing to European powers. In order to overcome a bottleneck in outfitting the Royal Air Force he established a Convair flight crew training facility in Bermuda.

In 1944 Beatty left to work for the Platt-LePage Aircraft Company in Eddystone, Pennsylvania. He contributed to the top-secret development of the XR-1 dual-rotor helicopter, the first helicopter used by the United States Air Force.

As his involvement at Platt-LePage waned, Beatty pursued numerous patents for new inventions, primarily relating to electronic circuits for communications. The first invention to go to market, however, was a type of highway signage that would indicate progress along the route and the expected travel time to the next destination city. His "Minute Maps", as they were called, were put into service on several routes in Alabama and were marketed by a new firm, "D. C. Beatty & Co."

Beatty was awarded the first patent for a circuit to allow telephone callers to leave messages when calls were unanswered. The device, which utilized a wire recorder, was marketed as the "Tele-Mat" telecorder by the Pentron Corporation of Chicago, Illinois, and sold for $250. Beatty's other telephone-related innovations included the first automated dialer and a hands-free telephone set. 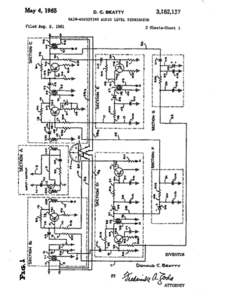 Beatty signed on as the first employee of the Hayes Aircraft Corporation in 1951 and was made head of the company's research and development in electronic equipment in 1958. While there he patented the "Gain-Adjusting Audio Level Terminator" (GAALT), a solid-state vario amplifier used to improve the signal to noise ratio in communications. The device was widely adopted, even appearing on the Kennedy Presidential Train. It was used by NASA for the Echo 1 communications satellite launched on August 12, 1960 and has found its way into a wide range of orbiting and terrestrial signaling devices ever since. Alabama Power even adapted the technology to allow for sending company signals through its power lines, eliminating the need for separate telephone communications (a parallel to its earlier adoption of Beatty's radio station.)

Beatty retired to his home at 2800 Overhill Road in Mountain Brook, where he was surrounded by his Amazonian artifacts and other mementos of aviation and exploring. The OX5 Aviation Pioneers named him their "Man of the Year" in 1973. Architect Fritz Woehle was given Beatty's permission to reconstruct the decor of his living room as part of an exhibit at the Birmingham Festival of Arts' 1975 Salute to Brazil. In 1978 he and his wife agreed to donate their nearly 300 Jivaro artifacts to the Smithsonian Institution, which previously had only a small collection of Stirling's souvenirs from the 1930s expedition. The donation led to the couple being awarded the James Smithson Medal, the Smithsonian's highest honor.

Beatty suffered a stroke on his 80th birthday and died in Birmingham three months later. He was buried at Elmwood Cemetery.