Carraway Boulevard (also known as 26th Street North) is the on-grade section of U. S. Highway 31 running through the north side of downtown Birmingham. A small section of the street also runs on the surface beneath the elevated Elton B. Stephens Expressway south of the western terminus of U. S. Highway 280 at I-59/I-20/20. 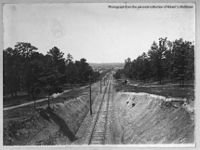 Carraway Boulevard is named for the Carraway Medical Center which dominates the streetscape in Norwood. The highway becomes the "Decatur Highway" as it crosses the Norfolk Southern Railroad near North Birmingham Park. The railroad turns south and parallels Carraway Boulevard to the former site of the Birmingham Terminal Station, which occupied two blocks of 26th Street centered on 5th Avenue North.

Prior to the construction of the Elton B. Stephens Expressway, 26th Street continued south over the Railroad reservation on the 26th Street viaduct, which once sheltered Ingalls Iron Works.

The first electric "thoroughfare lighting" was installed on 26th Street North on poles spaced 200 feet apart. The lighting was upgraded with new, taller poles on 100-foot spacings between 1st Avenue and 29th Avenue under the city's 1945 contract with the Birmingham Electric Company.

For an alphabetical list of locations, see the Carraway Boulevard category.