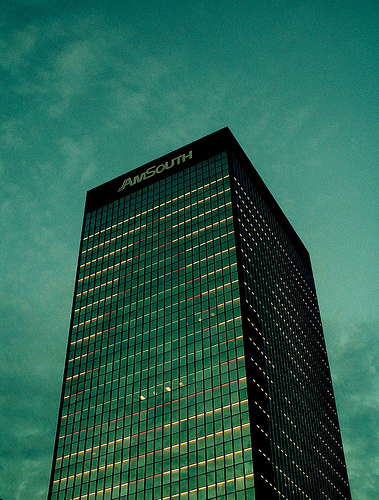 The idea of coloring the lights to produce large-scale decorative graphics was suggested by Drennen Jones, an administrative assistant to SONAT board chairman John Shaw. He had seen a similar skyscraper installation in Houston, Texas. First National Bank graphics and design assistant Gigi Baroco created the first designs and worked with real estate company Molton, Allen & Williams to translate the design onto each floor plan. The first installation involved inserting green and red plastic sleeves over 700 of the 2,700 fluorescent tubes, a job that took a four-man crew working seven 5-hour shifts to complete. Unless a design is changed, the colored sleeves remain in place from year to year. Originally the designs were shown from dusk to 1:00 AM beginning December 22 and ending at midnight on December 31. Building occupants are requested to lower their opaque window blinds by 4:30 each evening, with maintenance staff double-checking after offices close.

Regions Bank renovated 150,000 square feet of office space in the Regions Center in 2017 and welcomed 150 workers from the nearby Regions-Harbert Plaza into the building.

A large green wreath with a red bow replaced "JOY" in 1976 and the north-facing tree was switched out for a red and green stocking in 1977. That scheme has been used each Christmas since, though the season has been extended somewhat.

In May 2008 the east and west facades were decorated with the image of a golfer to publicize the Regions Charity Classic golf tournament, for which the bank served as title sponsor. In 2011 the practice was continued in recognition of the Regions Tradition.