The so-called axe syndicate was a group of people believed to have been responsible for a four-year spate of brutal killings which started in November 1919 and ended in May 1924.

Though no overall pattern connecting the crimes was established, they appeared to Birmingham Police Chief Fred McDuff to fall into at least two classifications. In many cases small shop owners, often foreign-born, were targeted in robberies, some of which were suspected of resulting from disputes between thieves and their fences. In another group of cases, police suspected retribution on behalf of presumed victims of miscegenation. From the few descriptions given by surviving victims, police considered all African Americans with criminal records to be suspects. The media helped shape the idea that a single killer, dubbed "Henry the Hacker" was to blame for the spate of gruesome murders.

Numerous arrests were made, and some convictions obtained in the attacks. Nevertheless, a public uproar rose in response to the frequent grisly attacks. Commissioner of Public Safety William Cloe made an "appeal to the people of Birmingham not to give way to hysteria over the recent axe murders," and continued denying the surge of pistol permits flooding his office. He did suggest that small merchants should consider closing earlier in the evenings. Sheriff Thomas Shirley also downplayed the story.

Though the evidence was thin and many victims refused to cooperate with police, investigators came to suspect a close group, or "syndicate" of killers. The Ku Klux Klan marched through Avondale in a show of force that McDuff hoped might stop the killings. An Italian Protection League also formed to defend shop-owners and their families. The attacks on shop owners apparently came to an end after five African Americans were arrested in the winter of 1923-24. At least the brutal armed robberies occurring after the arrests were no longer tied to "Harry the Hacker" or the "axe syndicate".

Accounts of the number of crimes committed by the gang vary, as do the lists of people killed or wounded in their attacks. The New York Times reported there had been 24 killed in 44 attacks, while the Birmingham papers counted only 15 dead and 13 wounded attributable to the "syndicate". A review of cases by Jeremy Gray for al.com in 2013 found 18 dead and 16 injured.

Four more arrests followed on January 6, 1924: Peyton Johnson, John Reed, and O'Delle and Pearl Jackson. According to one account, police were led to a house where the group bragged to each other about their murderous deeds on a tip from a paid informant.

During interrogations, the Jacksons, Johnson and Glover were given doses of an experimental "truth serum" consisting of scopolomine and morphine. While under the influence of the drug mixture, they collectively confessed to eight of the murders. Those confessions were affirmed after the effects of the drug had worn off. Furthermore, Jefferson County Solicitor James Davis said that the suspects' statements included elements of some of the crimes which had not been made public.

Investigators, which included Jefferson County Sheriff Thomas Shirley and Paul Cole, Chief of Detectives in the Birmingham Police Department, came to describe a "syndicate" of murderers who drew straws for the privilege of attacking selected targets. A man named Garfield was alleged to have founded the syndicate, but had died of natural causes during 1922. Three members of the gang were presumed to remain at-large. By February, 10 suspects had been identified.

Glover and the group of people suspected of being leaders in the syndicate caught in 1924 were interrogated using an experimental "truth serum", a mixture of scopolamine and morphine, which was also given to pregnant women to ease delivery. The drug put the suspects into what was described as a "twilight sleep," during which they lacked the will to lie.

The interrogations were led by a local physician, given the fictitious name of "A. A. Goldberg" in press accounts. He prescribed a typical dosage of four ounces of the mixture. After a preliminary medical examination to screen for conditions that would make the drug dangerous, the drug would be delivered in increments by hypodermic needle or in capsule form. The subject would be told beforehand to remember a number, and asked to recall it periodically while the drug was administered. When the subject could no longer remember the number, he was considered to be ready for questioning. Interrogation was conducted in a darkened room, using bright lights to "recall the suspect to his senses". The usual methods of the "third degree", such as pushing, rough handling, slaps, kicks, curses, terrifying stage effects, and deprivation from food, drink, and sleep, would not be used. The drug was not found to be infallible, as many statements made by prisoners were deemed meaningless.

In February 1924, Davis reported that he was convinced of the effectiveness of the serum. He credited it with leading police to parties they did not initially suspect, but whose involvement was corroborated by the discovery of physical evidence in searches. He stated that "when criminals adopt an attitude of silence in the Jefferson County jail their tongues will be unlocked with this serum," which he predicted would become "generally used" over the next few years. He indicated that police from around the country had contacted him for more information about the use of scopolamine in criminal investigation.

On the other hand, Davis recognized that judges and juries remained skeptical. He did not use testimony obtained from witnesses or suspects while under the influence of the drug in his prosecution of cases. He told the press in a statement that "evidence obtained while under drug will not hold in court, unless corroborated by other evidence." 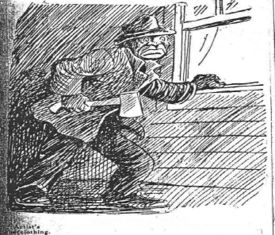 The Age-Herald's fictionalized depiction of the villain, dubbed "Henry the Hacker," in their January 27, 1922 edition

Odell and Pearl Jackson and Peyton "Foots" Johnson reportedly confessed to police under the influence of scopolamine on December 24, 1923. Mary Francis Sanders testified to having heard Johnson brag about the murder of Robert John Turner. They were convicted in Judge William Fort's courtroom in Jefferson County Circuit Court in February 1924 and sentenced to hang. Interviewed in jail that November, they both denied having made confessions. Ed "Bulls Eye" Jackson was also convicted of having participated in the crime and sentenced to life in prison. At re-trial, Johnson was given a 10 year sentence and the death sentences for the Jacksons were confirmed. Their hangings were scheduled for August 7, 1925, but Governor William Brandon commuted the sentences the day before.

In a 1926 story about the continued high murder rate in Birmingham, Jefferson County Solicitor Jim Davis referred to the end of the ax-murder spree as an "excellent illustration" of the principle that "speedy trial and convictions halt crime." According to Davis, "Two years ago we convicted three negroes of these crimes. Two of them were sentenced to death but their lives were saved by the governor. The third is now in the death cell awaiting execution. Since these convictions — now two years old — there has not been another ax-murder."

Butch Baldone, interviewed in 2013, said that African-Americans were unfairly targeted by police and that many of the attacks on Italian grocers had been perpetrated by an extortion ring connected with the Italian mafia. He related that his family discovered the identities of those responsible for the attacks, and sought justice from them outside the courts.