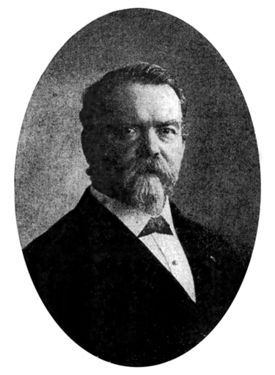 Frank P. O'Brien, sometimes spelled O'Brine (born February 29, 1844 in Dublin, Ireland; died September 10, 1910 in Clifton Heights, Pennsylvania) was a builder and early civic leader of Birmingham, serving on the Board of Aldermen, as Jefferson County Sheriff, in the Alabama House of Representatives and as Mayor of Birmingham.

O'Brien was born in Dublin to Michael Andrew O'Brien, a teacher and former priest in training from Limerick and the former Mary Allen Corcoran. The family emigrated to the United States in 1848 and first settled in Honesdale, Pennsylvania, and later Scranton, where Michael O'Brien was appointed superintendent of the Diamond Mines. Frank left his family at the age of 14 and apprenticed as a fresco and scenic painter under Peter Schmidt. He traveled to Alabama to assist Schmidt in the painting of murals at the Montgomery Theatre in Montgomery in 1859. While there, the painters were also engaged in the decoration of several churches.

In 1861 at the outbreak of Civil War, The seventeen-year-old O'Brien joined up with the Independent Rifles which made for Pensacola, Florida as part of 2nd Alabama Regiment to secure U.S. military installations at Fort Barrancas and Warrington Navy Yard, both of which had been abandoned by their garrisons in favor of Fort Pickens. He then re-enlisted with the Montgomery Blues and was assigned to the 3rd Alabama Infantry Regiment. He commanded a scout patrol for the next two years and was wounded at the Battle of Little Washington and again at the 2nd Battle of Plymouth, North Carolina in October 1864. In that engagement he volunteered for duty aboard the C.S.S. Albemarle, an ironclad ram used against the Union fleet shelling the city. He was captured and held captive from December 12, 1864 to February 1865. While he was serving as a unit commander, O'Brien also began working for the first time as a journalist, filing reports from the war for the Richmond News.

O'Brien was one of the first people to move to the newly-founded City of Birmingham, arriving on June 1, 1871 to attend the Elyton Land Company's first auction of lots. He purchased a lot at 2014 2nd Avenue North and built a small frame house out of which he began selling lumber and building supplies. He also advertised his services as a builder and soon became one of the city's leading business owners and citizens, at one point employing nearly 350 men. He moved his offices to the northwest corner of 2nd Avenue North and 21st Street, opposite the Jefferson County Bank Building, in April 1872 while simultaneously opening a sash and blind shop on the Railroad Reservation site that later served the Alabama Great Southern Railroad as a freight depot. His company was engaged to construct the first Jefferson County Courthouse in Birmingham, the Birmingham Rolling Mill, Alice Furnace, and numerous coking ovens for the Pratt Coal and Coke Company.

O'Brien planned and developed Sublett Hall, the city's first playhouse and meeting hall in 1872. He painted the scenery himself and acted as promoter for the next two years. He also opened a planing mill which produced much of the wood sash and door trim used in the early buildings of the city. He expanded the business with the operation of Alabama's first steam-powered brick-making machine. He joined with Frank Duval an Eugene McGaw to found the Birmingham Daily Item, though he was not active in the newspaper, focusing on his contracting work.

As a member of the second Board of Aldermen, he stayed in the city and was involved with helping the victims of the 1873 cholera epidemic and nearly died from the disease himself. Before the end of his two-year term, O'Brien resigned from the Board of Aldermen to attend to his growing private business interests. He remained active with the Pioneer Fire Company No. 1 which served as the city's primary fire fighting force before 1885.

In 1875 he served on the committee that helped establish the Experimental Coke and Iron Company that demonstrated the viability of Birmingham's mineral resources for ironmaking. O'Brien was contracted to construct the coke ovens at the rebuilt Oxmoor Furnace, which went into blast the following February. In 1879 he was among the charter directors of the Birmingham Gas Company. In 1893 he was counted among the founding trustees of the Birmingham Dental College and a year later among the regents of the Birmingham Medical College.

Though once a business failure to the tune of $62,000, O'Brien made good all his debts and eventually enjoyed healthy returns on his investments in Birmingham real estate. He built the 1,266-seat O'Brien Opera House on the site of a former sawmill opposite what was then a cornfield on the corner of 1st Avenue North and 19th Street in 1882. An active promoter of high-class theater in what was otherwise a rough and tumble city, O'Brien served as vice-president of the Southern Theatrical Circuit, a network of 33 opera houses and theaters.

In 1881 O'Brien returned to the newspaper business, joining with Birmingham Iron Age publishers W. C. Garrett, Frank Evans and others to organize The Daily Age, which was published, sometimes at a loss, as part of O'Brien's efforts to boost civic feeling in Birmingham. In 1886 he backed Rufus Rhodes in the formation of the Evening News, and in 1887 he joined with Rhodes and William Pinckard to launch another morning paper, The Daily Herald. The Herald and Iron Age merged in December 1888 and O'Brien assumed the duties of president and manager of the Birmingham Age-Herald. He assumed sole ownership of the paper in 1894, but was forced to sell out during the Panic of 1895, to the owners of The Daily State.

O'Brien was continually active in Democratic politics and was a delegate to three of the four state constitutional conventions held following the Civil War. He was elected to the first of two terms in the Alabama State House of Representatives in 1892 and also campaigned for Democratic New York Senator David Hill in that year's presidential election. In the 1896 election, O'Brien supported Grover Cleveland. He told a reporter for The New York Times that the Southern delegation to the Democratic National Convention would strongly favor a "sound currency" (against Benjamin Harrison's policy of restricting the free coinage of silver).

That year O'Brien also won election to the office of Jefferson County Sheriff in a fierce 8-man race. In 1900 he was returned to the state legislature by popular appeal, even though he did not campaign for the office. He narrowly lost to incumbent George Ward in the 1907 mayoral election. As a candidate, O'Brien had promised to improve the undermanned Birmingham Police Department while Ward cast his challenger as a puppet of liquor and gambling interests.

Like Ward, O'Brien supported the efforts of Birmingham's legislative delegation to secure a referendum on annexing adjoining suburbs into a "Greater Birmingham" and celebrated the successful vote while running again for office. He was elected in the 1909 Birmingham mayoral election without opposition, and took office on May 8 of that year. He served as the first Mayor over the newly-expanded metropolis created when the annexations took effect on January 1, 1910. He was also the last Mayor elected to serve a full term under the Aldermanic system prior to the establishment of the Birmingham City Commission.

The Age-Herald blamed the stresses surrounding the administration of the Greater Birmingham annexations as bringing about a nervous breakdown in the Mayor. He began suffering from acute insomnia in May and was urged to rest at home, which he did for days at a time. On July 7 he left his office at City Hall for the last time, but continued to work through correspondence from home. His insomnia did not improve and led to depression. His physician recommended that he be admitted for treatment at the Burn-Brae Sanitarium outside Philadelphia. There he was prescribed "absolute rest and quiet" and not allowed to receive visits, even from his wife, Dannie. She returned to Birmingham to await word of his successful treatment while his daughter, Bossie and son-in-law, Oscar Hundley, took residence in New York until they could accompany him home.

The doctors at Burn-Brae were optimistic of a cure, and reported improvements in O'Brien's spirits. He dined with his doctor's family at the sanitarium and complained only of a "fullness in his head." That conditioned worsened, and a few days later he was found unconscious at his open window, having apparently been taking the fresh air. He could not be revived, and was pronounced dead of apoplexy. Bossie Hundley telegrammed neighbors to go to her mother to inform her and stay with her. J. D. S. Davis, the widower of Margaret O'Brien, was the first to reach Mrs. O'Brien. She was reading a letter informing her of her husband's apparent improvement. Davis was forced to tell her about his death, and she was "prostrated with grief," but recovered her senses the following morning.

At City Hall, O'Brien's secretary Scudder Ryall ordered his offices draped in mourning cloth and moved the Board of Aldermen to suspend business for the remainder of the day. The following morning all other city buildings, including the town halls of the former suburbs recently annexed, were similarly draped and their flags lowered to half mast.

O'Brien was survived by his wife and two of his five children. The remaining month of his term of office was assumed by Harry Jones, who served until Culpepper Exum took office on October 5 as Mayor, and the following month as President of the new Birmingham City Commission. O'Brien's body was transported home aboard the Southern Railway's Birmingham Special to the Birmingham Terminal Station and met by a solemn crowd of more than 5,000 mourners. The funeral was held at St Paul's Catholic Church. The Knights of Columbus led a long procession from there to the O'Brien family vault at Oak Hill Cemetery.