View of the southeast corner of Quinlan Castle in August 2006

Quinlan Castle was a 4-story, stone-veneered, castle-shaped building on the northwest corner of 9th Avenue South and 21st Street South. It was constructed in 1927 and originally housed 72 efficiency-size apartments.

It was vacated in the late 1990s and ownership defaulted to the City of Birmingham. Over the next decade the city regularly solicited proposals for its redevelopment, a process slowed by historic preservation protections applied to the structure. In 2008, the building was purchased by Southern Research Institute for $400,000. They made repairs to the exterior, but did not reopen the building. In 2022 the building was demolished for construction of a new Center for Pandemic Resilience.

Quinlan Castle was designed by C. W. Ford and constructed by H. P. Hanna, who formed the Quinlan Construction Company for the $100,000 project. The unusual castle motif has been credited to a pair of doctors, investors in the building, who were inspired by castles they saw in France during World War I. A 1929 advertisement makes the unlikely claim that the design was based on "the actual plans of a medieval English castle."

The building is composed of two U-shaped halves connected by arched gateways on the north and south, forming a 4-story rectangle punctuated with dozens of arch-topped windows. The roofline is crested with a battlement and adorned with conical turrets at each corner. The building was constructed with a reinforced concrete frame, infilled with structural clay tile and clad with rough sandstone veneer.

The name of the building was adopted from Quinlan Avenue, the former name of 9th Avenue South which honored Bishop Quinlan of the Catholic Diocese of Mobile. Quinlan had purchased the hilltop and surrounding property as a potential site for Birmingham's first Catholic church.

Quinlan Castle was rumored to have been the Birmingham headquarters for the Communist Party. In fact it was home to party secretary Robert Hall. The building was raided by Birmingham Police, led by Lieutenant Ollie Osborne in 1940, but they found little of interest besides a letter from a Tennessee Valley Authority employee suggesting Communist activities in that agency. Still, the negative publicity led the owners to change the name to the Royal Arms Apartments.

In 1984 Quinlan Castle was added to the National Register of Historic Places. Its ownership fell to the City of Birmingham in 1993.

Quinlan returned to the spotlight in 1994 when then City Council representative William Bell was running for Jefferson County Commission District 2. In order to establish residency in both districts, he took a room in the Pickwick Hotel. When the temporary nature of his arrangement was publicized, he leased an efficiency at Quinlan Castle. Residents interviewed in the press hoped that the Councilman's presence would lead to improvements in safety and maintenance for the deteriorating facility.

In 1995, the city cleaned the exterior, added new landscaping and signage, and renovated the apartments as affordable housing, managed by Engel Real Estate. The new signs added a Quinlan coat-of-arms depicting "two lions rampant combatant between a mullet surmounted of a crescent in chief and a dexter hand couped at the wrist and erect in base all gules" on the seal. [1]

The apartment building was vacated by the mid 1990s and its ownership reverted to the City of Birmingham. The future of the structure remained in doubt due to its deteriorating state. By 1998, the structure was added to the Places in Peril list of the Alabama Historical Commission and the Alabama Trust for Historic Preservation. In the morning of February 26, 2003, a small fire broke out in one of its apartment units. The Birmingham Fire and Rescue Service ruled the fire an accident and stated that it was probably caused by vagrants.

Over the next decade the city regularly solicited proposals for its redevelopment, a process slowed by historic preservation protections applied to the structure. In 2008, the building was purchased by Southern Research Institute for $400,000. They made repairs to the exterior, but did not reopen the building. 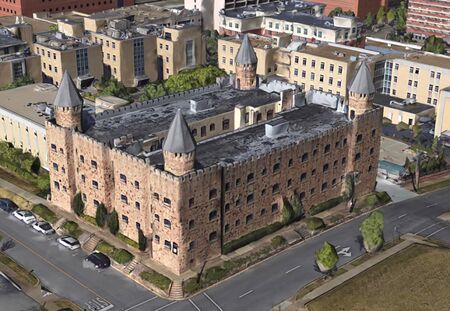 Google Earth view of Quinlan Castle from the southeast 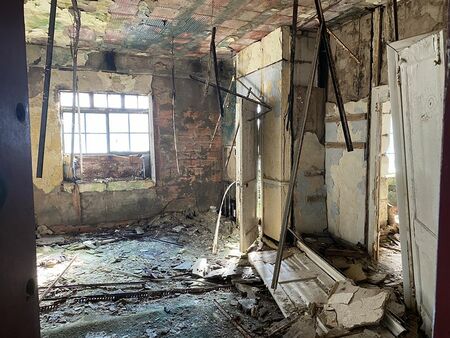 Interior of Quinlan Castle in 2021

Each year since 1999 the City of Birmingham has solicited proposals for redevelopment of the property.

Southern Research Institute proposed to demolish the structure to make way for additional parking and a proposed expansion of their facilities early in 1999. The city refused to sell without an agreement to protect the exterior appearance of the building. After the SRI proposal, the city recieved four proposals for its reuse in November 1999. These proposals included:

A proposal for the structure in March 2001 from the QC Partners would have converted the castle into 30 luxury apartments. By March 2002 the project stalled and was eventually cancelled after an agreement for parking could not be reached.

A failed 2003 proposal from Excell Financial would have converted the castle into 20 luxury condominiums. The proposal called for 16 two-story townhomes and 4 penthouse units with access to the roof and to the castle's turrets. Covered parking on the castles eastern side would have also been included as part of the development.

No deal was reached with any of these parties. In the fall of 2006, Lee Stayer's 3rd grade class at Advent Episcopal School wrote letters to the Birmingham News as part of a class assignment to share their ideas of how the castle should be redeveloped. The children's proposals included a movie theater, orphanage, library, mall, animal shelter, hotel, antique shop and a medieval museum.

The city again solicited proposals for purchase and redevelopment of the property in May 2008. Among the proposals were those from the Veteran's Administration and from Urban Development and Management (who offered $520,000 to purchase the property), as well as SRI's $400,000 offer. The mayor's office recommended that the city approve Southern Research's proposal because it has adequate parking in the area already and the expansion of biotech uses benefits the city. The Birmingham City Council voted to approve the mayor's recommendation on August 5. Valerie Abbott was the only member to vote against the proposal, saying that the deal did not include the language protecting the historic facade.

SRI closed on the purchase in early December and proceeded with plans to stabilize the roof and facade. On February 21, 2009 the turret roofs were lifted off the corners of the building and set down on the flat part of the roof to make them accessible for repairs. Exterior windows and fences were replaced and the courtyards were cleaned of overgrowth and litter. 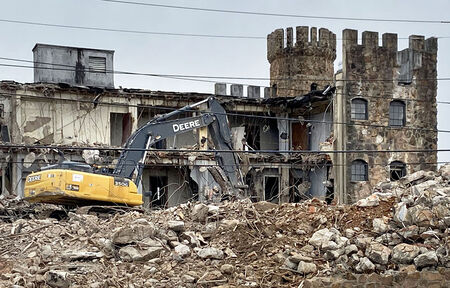 Demolition of Quinlan Castle in January 2022

In November 2021 Southern Research executive CEO Josh Carpenter announced plans to demolish Quinlan Castle for construction of a new Center for Pandemic Resilience. He and architect Joel Blackstock explained that the historic building was beyond repair and entirely unsuited to any modern use, let alone to the non-profit's mission. The Birmingham Design Review Committee confirmed that no restrictions had been attached to the transfer of property, and unanimously approved the demolition permit on November 16. Demolition began on January 7, 2022.