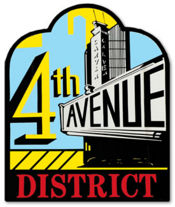 The 4th Avenue Historic District is a historic commercial district stretching along three blocks of 4th Avenue North, from 15th to 18th Street in downtown Birmingham. The district is notable as a center for Black-owned businesses which served Black customers during the city's long period of enforced segregation. For a time the area was known pejoratively as "Scratch Ankle".

Architecturally, the district houses a grouping of notable buildings constructed between 1908 and 1935. Culturally the district is remembered in story and song - notably in the many Octavus Roy Cohen stories set in Birmingham's African-American community.

Currently the 4th Avenue Historic District is an important part of Birmingham's Civil Rights District, both as a physical artifact of segregation which aids in understanding the city's racial history, and as a retail and entertainment district serving visitors. The district hosts the annual Taste of 4th Avenue Jazz Festival.

In 2019 the 4th Avenue Historic District was selected for planning, organizing and training assistance for economic development offered by Main Street Alabama. The partnership launched the 4th Avenue Forward program in late 2020. The program includes wayfinding and streetscape improvements, a city-funding façade improvement grant program, and a campaign to promote residential development in the district.

"Prior to 1900 a “black business district” did not exist in Birmingham. In a pattern characteristic of Southern cities found during Reconstruction, black businesses developed alongside those of whites in many sections of the downtown area. After the turn of the century, Jim Crow laws authorizing the distinct separation of “the races” and subsequent restrictions placed on black firms forced the growing black business community into an area along Third, Fourth, and fifth Avenue North, from 15th to 18th Streets. Segregation and discrimination created a small world in which black enterprise was accepted and to which blacks had open access. This area served as the business, social, and cultural center for blacks with activities similar to those in the predominantly white districts. The businesses located in the area included barber and beauty shops, mortuaries, saloons, restaurants, theaters, photographic studios, cleaners, shoe shine parlors, and motels. These black businesses and their successors continued to do well throughout the 60s. The black business district was not only “alive” during the daylight hours but “thrived” throughout the night. On Friday and Satuday nights, the streets were filled with crowds of people visiting the bars or just out for a stroll. Live entertainment made the district “the place to be.” While most of the theaters provided “movies” the Frolic and Hury Henry had “live” stage shows during the 1930s. Not only did singers and dancers captivate the audiences, but live vaudeville shows came to the area. Bob Williams, owner of “Bob’s Savoy,” a famous night club and restaurant, entertained the elite of the black athletic and entertainment world. After the Civil Rights Struggle, many new doors were opened literally and figuratively to blacks. Many black businesses, especially hotels and cafes, suffered with the end of segregation. Once allowed into white establishments, sadly many balcks did not return to the black-owned businesses. The abandonment of black-owned businesses caused a major economic impact on the area, causing many to do their shopping in malls and other areas."