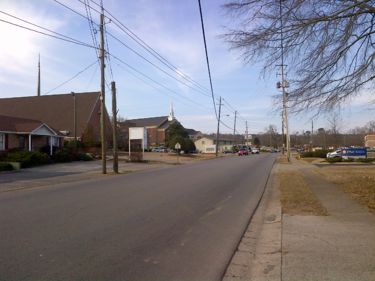 In 2013, Trussville's downtown master plan called for the removal of buildings between Linden Street and Main Street, creating a dedicated turn lane from the Vann Circle intersection of southbound Chalkville Road on to the eastbound lanes of Main Street (U. S. Highway 11), and aligning Linden with the access road to the Trussville CIty Schools Central Office. Negotiations began that fall to acquire the land necessary for the turn lane. The property was acquired but the turn lane plans were abandoned for a plan which called for a pedestrian plaza at the northwest corner of the intersection. The Braden Furniture and Husky Barber Shop buildings were razed in 2019, with Herb's Hardware coming down in 2020 during a project to relocate utilities at the intersection underground and create sidewalks. A plaza with a clock tower donated by the Trussville Rotary Daybreak Club was constructed and Linden Avenue relocated in 2021.

During 2014, the roadbed of North Chalkville Road from the Rockridge Road/Poplar Street intersection southward to Hewitt Street was rebuilt entirely at a cost of $517,911.43 by Dunn Construction. Sidewalks and gutters were also repaired.

For an alphabetical list of locations, see the Chalkville Road category.