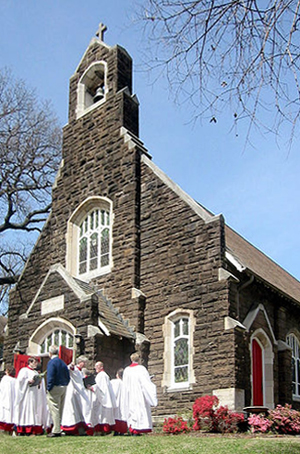 St Andrew's Episcopal Church is a parish church located on the northwest corner of 11th Avenue South and 12th Street on Birmingham's Southside. The liturgy is "high church". In addition to regular Sunday services, the church operates a preschool program and a residence for the mentally handicapped.

St Andrews had its beginnings in 1902 with a Sunday School mission founded by John Murray, rector of the Church of the Advent downtown, which met at a small private school adjoining the residence of Jonathan Shaw on 11th Avenue South at 14th Street. The Sunday School was led by Shaw's daughter Adele. Concurrently with the establishment of the Sunday School a group of Advent parishioners formed the Brotherhood of St Andrew and made plans to build a Southside chapel. In 1903 the two efforts were merged into a St Andrew's Mission. A meeting was held at the home of Thomas Forbes in May of that year and fund-raising efforts began with a $100 pledge from Bishop Charles Beckwith.

In April 1904 the mission authorized the purchase of a 100' x 128.5' lot at the corner of 11th Avenue South and Central Street. The first services were held in July 1904 at Miss Shaw's schoolhouse. Raimundo DeOvies, rector of St John's Ensley, agreed to serve the mission by leading regular services beginning in October.

The first church building, a 25' x 50' wood-frame sanctuary, was constructed in 1905 at a cost of $650. The first services took place on Easter Sunday of that year. It was an evening service with DeOvies officiating. A local music store lent an organ for the church's use and Caroline Shaw, widow of Jonathan, presented a lectern Bible in his memory. A girls' group led by Louise Pyrelle donated $75 for the purchase of a marble baptismal font (still used by the church).

After Bishop Beckwith approved the petition from communicants of the mission, the congregation met to organize and elect a vestry on June 5, 1905. DeOvries was called as rector with a salary of $100 per month. The parish was formally incorporated the following December and was granted full parochial rights at the following Diocesan Convention of 1906. At the time of its incorporation the congregation consisted of 187 members. By the end of 1907 the interior of the church had been redecorated and a parish house and rectory had been constructed nearby. The parish house, with a large meeting room of 35' x 61', served as a gymnasium for the boys' club, a classroom for Bible study, and even as a cinema, equipped with an Edison Moving Picture Machine, used to illustrate Bible lessons. By May of 1911 the vestry had approved moving forward with plans to construct a new, permanent church building.

As the church worked to secure funding for a new building, the urgency of construction was hastened by the destruction of the wood-framed meeting house by a tornado on March 21, 1913. For the next few months members of St Andrew's attended services as guests at St Mary's on the Highlands Episcopal Church. At the urging of the Bishop, the parish considered merging with St Mary's, but decided instead to remain separate and to rebuild. On March 31 they purchased the present site and renewed efforts to raise building funds.

During the Summer of 1913, architect John Marriott of the firm of Joy & Marriott began drafting plans for an English Gothic-style church with a striking open bell tower at the peak of the front gable over the narthex. Begun in August, the building's construction was delayed by a mason's strike. The cornerstone was laid on November 30 (St Andrew's Day). The exterior was finished in rough-faced brownstone with limestone copings and trim. Space for the rector's office and a classroom were built flanking the chancel at the rear of the church. The basement below the chancel served as a small parish hall. The bell-tower was furnished with the old 1871 bell from St John's Elyton, moved by the heirs of the original donor. The wooden entrance doors, painted bright red, quickly became a Southside landmark. The first services in the new building were held on Easter Sunday, April 4, 1915.

A 1980s addition to the back of the church added offices, classrooms, meeting rooms, and a parish hall. Community Kitchens and other non-profits have their offices in the building. On September 28, 1986, St Andrew's was added to the National Register of Historic Places.

In the early 21st century the church underwent a multi-phase renovation which included rebuilding failed retaining walls at the perimeter of the lot, re-roofing the church and parish hall (in slate and copper, respectively), adding a new pipe organ to the nave, refurbishing the Lady Chapel, and reconfiguring the choir and chancel. Architectural services were provided by Carraway & Associates and the work was performed by Day Star Construction.

In early 2006 parishioner Mike McKenzie created a short parody of a radio advertisement for St Andrew's in the style of a monster truck rally spot. Though it was never aired on radio, an MP3 file of the spot spread quickly through the Episcopal community provoking laughter, ire and admiration.

In 2006 work began on a new building for Birmingham Episcopal Campus Ministries on the rear of the site. This building was designed by Mark Burns and was constructed by Bradford Building Company. Upon completion it was named Trinity Commons: Episcopal Student Center.

Adjacent to the church is St Joseph's House, which serves as a meeting place and the sexton's residence.