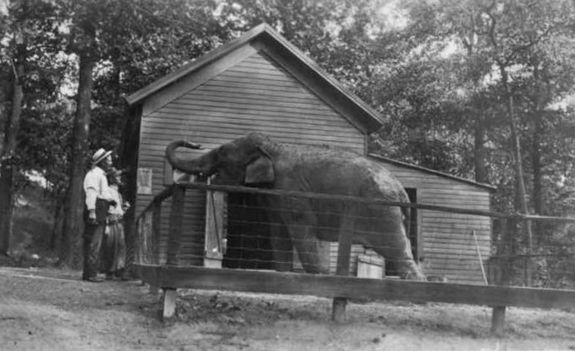 The zoo at Avondale was preceded by two informal menageries, mostly of native animals. One was kept at Magnolia Park by members of Birmingham Fire Station No. 3 in the 1890s. Another was located at the privately-operated East Lake Park. In 1892 it was reported that their collection included "a bald eagle, a wolf, two pelicans, two deer, a ground hog, two coons, two white rabbits, a kangaroo, seven prairie dogs and a South American anteater."

The first animal enclosures at Avondale Park were constructed in 1911. The zoo's star attraction, Miss Fancy the elephant, was purchased from a struggling circus in 1913 with money raised by civic promoters and a kids' penny drive. The city budgeted $500 for a small wood-framed, green-painted "elephant house" in the summer of 1914, along with $1,872 for operational expenses for the year. The elephant spent most of the summer out of doors in a fenced yard. In winter her barn, with a slightly undersized door, was heated by a small stove. She was tended initially by trainer Dayton Allen, and later by John Todd, who developed a close relationship with Miss Fancy. She refused to eat when he left for 10 months to serve in World War I and lost a great deal of weight. She greeted him with cheerful trumpeting as soon as he returned from duty.

Other animals on exhibit alongside Miss Fancy included a bison, two cows, Dick the rattlesnake, a llama, two bears, an assortment of foxes, wolves, coyotes, raccoons and wildcats, along with monkeys, rabbits and water fowl. Most of the animals were presented to the zoo as gifts from area residents. Explorer Donald Beatty brought a jaguar cub home from his travels in the Amazon basin and, when it proved an unwieldy house pet, it was donated to the zoo. The park's breeding pair of swans, which made free use of the lagoon, were donated by Robert Jemison Jr in 1931.

The publicity surrounding the new attraction led members of 16th Street Baptist Church to petition the city to be allowed to picnic at the park one Sunday in the Summer of 1914. The Birmingham City Commission accepted the petition, and decided to allow all Black residents to visit the park on July 9. Their decision was harshly opposed by the Avondale Civic League, and the church eventually withdrew its request.

Neighborhood opposition and lack of funds prevented the city from pursuing that proposal, and a committee was appointed to study the cost of improving the zoo grounds in place. They wrote the Olmsted firm for advice about properly housing a zoo collection. They were put in contact with the few municipal zoos existing in that period. They were impressed with the successful zoological parks in Memphis and Nashville, Tennessee, both of which enjoyed dedicated sources of funding. A proposal to implement a 1-mill property tax for Birmingham's zoo went nowhere and the outlook was made even bleaker by the onset of the Great Depression. In 1932 the Parks Board first took up a suggestion to shutter the attraction. With no decision made, the menagerie continued to grow, adding a llama, lynx, wolf, raccoon, pheasant, three goats, five more alligators, an eagle, three rabbits, and a gopher by 1934.

With its budget threatened, the board formed a three-man committee, made up of George Bellsnyder, Thomas Bowron and James Morgan to study the zoo question. They recommended closing the zoo down by returning the donated animals to their former owners and seeking buyers for the rest. The city hoped to get $3000 for Miss Fancy, but the highest cash offer they received was for $25. The Birmingham Board of Education declined to take her on, as did former Mayor George Ward, proprietor of the Roman-styled Vestavia estate on Shades Mountain. He reportedly told the Park Board that "Lions, tigers and elephants contributed to the downfall of the Roman Empire. No elephant will have the opportunity to bring about the disintegration of my Roman empire." (In another version, he simply declined on the basis that she might fall off the cliff edge.)

The City Commission voted to close the zoo and sell off the collection. The Cole Brothers–Clyde Beatty Circus purchased Miss Fancy, along with the zebu, llama, and nine monkeys for a total of $710. Circus crews arrived on November 11, 1934 to accompany the newly-acquired animals to their winter quarters in Peru, Indiana. The first boxcar proved too small for Miss Fancy, and she waited by the rail siding for a larger carriage, which departed the city about 7:00 PM.

Other animals in the collection at the time were, "a 'gila monster' lizard, one snake, one buffalo, one eagle, three 'sacred' doves, three rabbits, three owls, 20 mallard ducks, 80 scova geese [Muscovy ducks], four mud-hens, one hybird [?], two raccoons, two peacocks, one lynx cat, one goat, three turtles, 12 geese, four swans, [...]two gophers, 300 squirrels, three groundhogs and a parrot." Another report also mentioned a black bear, a bison, a wolf, a pheasant, 10 alligators, a hawk, and a gopher. The waterfowl were allowed to remain in the park, as perhaps were the 300 squirrels, but the rest of the animals were sold off. Many of them were acquired by zoos in Augusta, Atlanta, Washington D.C., and Attalla.

While most contemporary accounts of the Avondale Zoo were positive, later recollections of the conditions at the Avondale Zoo made reference to "the cages of unhappy monkeys, the moth-eaten bears, and the lonely, poorly housed elephant" in cautioning the city against recreating that "architectural and aesthetic horror" as it considered building a new animal park. During the 1940s, the closest thing Birmingham residents had to a zoo was another small collection of native species exhibited by the Birmingham Chapter of the Izaac Walton League at Lane Park. It wasn't until 1955 that the Jimmy Morgan Zoo, the forerunner of today's Birmingham Zoo, opened the the public.