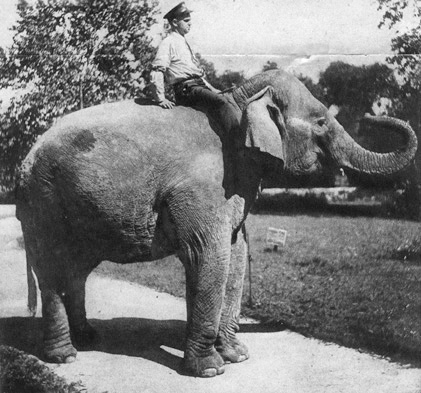 Miss Fancy (born October 12, 1871; died 1954 in Buffalo, New York) was a large, gentle Indian elephant (Elephas maximus) that served as the star attraction at the Avondale Zoo, Birmingham's first public zoo, located in the southeast corner of Avondale Park, from 1913 to 1934.

The best-documented story is that circus officials had offered her for sale, along with a group of smaller animals, prior their stay in Birmingham; and that a local party, led by Birmingham Age-Herald publisher Ed Barrett, decided to take the opportunity to purchase them as a major enhancement for the animal collection exhibited at Avondale Park since 1911.

Barrett's initial $500 contribution was matched by the Birmingham Railway, Light & Power Company, whose Avondale Streetcar brought visitors to the park. After the circus had moved on, an anonymous donor came through with another $500. Barrett then traveled to Tuscaloosa to close the deal. His newspaper solicited contributions "to pay the remaining debt on 'Miss Fancy', and printed donors names, divided into "children" and "grown-ups". By January 1914 the "Miss Fancy Fund" stood at $129.25, including $25 gifts from Robert Jemison Jr, Relton Gilreath, Basil Allen and John Nast. The fund eventually raised the remaining $500 to pay the debt.

There are other accounts of Miss Fancy's purchase. A more prosaic version has a city zoo official approaching the struggling circus during its stop in Birmingham. Another story has it that the Birmingham Advertising Club obtained her for a promotional gimmick, then offered her to the city once the novelty faded. A more colorful version, promulgated by former Miami Herald editor Ellis Hollums, was that Barrett won the elephant from the circus owner in a poker game.

Whatever the case, the deal was struck in Tuscaloosa, either during another circus stop, or at a liquidation auction. Barett's paper presented the animal as a gift "to the children of Birmingham" (though the city never recorded her as public property). In some versions, the $500 raised by schoolchildren went into a fund to provide for Miss Fancy's care.

In the summer of 1914, the city budgeted $500 for a green-painted elephant house at the Avondale Park zoo, and $1,872 for the zoo's overall operational expenses for the year.

Miss Fancy was initially placed under the custodianship of Dayton Allen, assisted by John Todd, an African American zoo worker from Alexander City. The two of them were instructed on her care and handling by circus trainer Curly Hayes, who warned that the elephant had killed one man and injured another. Allen resigned not long afterward, giving Todd full-time charge of Miss Fancy at a wage that peaked at $24 per week. He remained her handler for the remainder of her tenure in Birmingham. Todd used an elephant hook in her training, taking care "never to use the hook unless she has done wrong, and knows that she has done wrong." His judicious punishments appealed to her innate sense of justice, and were borne without resentment. Early on, Todd had to leave the zoo for ten month's service in World War I. Despite the efforts of keeper Luell Williams, Miss Fancy "wasted away" to a fraction of her 4,800 pounds while Todd was gone. Upon his return, she greeted her master cheerfully with a series of trumpet blasts. Thereafter Todd's vacation weeks were invariably interrupted by a request that he come back and spend some time with his elephant to calm her down.

Miss Fancy was an early and enduring favorite of the city's schoolchildren. She was known to recognize visitors who brought her treats and gave them special attention whenever they were in sight. Todd would often help as many as six or seven young children onto her back for a ride around her pen. Though many parents initially quavered at the thought, the gentle elephant gradually earned the trust of nearly every parent. The opportunity was not given to all, though. African-Americans were not admitted to Avondale Park under the city's segregation laws. The publicity surrounding the new attraction led members of 16th Street Baptist Church to petition the city to be allowed to picnic at the park one Sunday. The Birmingham City Commission accepted the petition, and decided to allow all Black residents to visit the park on July 9, 1914. The decision was harshly criticized by the Avondale Civic League however, and the church withdrew its request.

Miss Fancy was a feature of almost any parade organized in the city. She was considered an informal mascot for Howard College, and at least once was permitted to lead the college students on their parade all the way to Legion Field for the Bulldogs football game against Birmingham-Southern College. 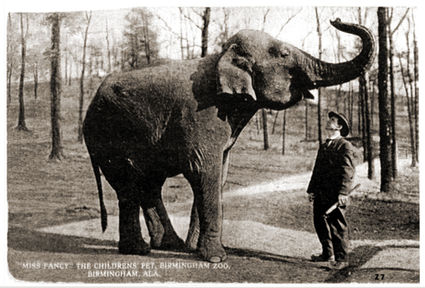 Over the next two decades, Miss Fancy's weight climbed to 8,560 pounds. She was reported to have eaten 125-170 pounds of hay, and three to five gallons of grain per day, washed down with 50-110 gallons of fresh water (depending on the weather), all supplemented by popcorn, peanuts, apples and watermelons brought to her by residents. In 1931 her food was reported to cost the city about $100 per month at wholesale prices, about 40% of the total monthly grocery bill for the zoo. Contemporary sources reported that elephants were expected to live to 350 or 400 years, and her keepers believed that she was in the bloom of youth and should be growing steadily to maturity at about age 75. It is now estimated that Asian elephants live an average of 60-80 years.

Miss Fancy was exercised daily by giving rides to children and chauffeuring Todd on 5 to 10-mile excursions through nearby neighborhoods. She also helped the occasional stuck motorist out of a pothole. Well-trained with "Short Indian" commands in from her circus days, she would perform a number of tricks, but only for Todd. "Da-bal" set her walking and "jet" caused her to stop. "Boo-la" told her to stand behind a wagon or truck to give it a push. The command "Beela" would get her to raise her right foreleg as a step-stool and then lift him onto her back. Another command would start her marching with high-steps. "Da-koo" prompted her to kneel, and "hit-a-boo" was an instruction to lie down. Finally "Koo-pah-koo" was Todd's instruction to "say your prayers" at bedtime.

Miss Fancy was also known to be a medicinal drinker. Whenever she showed symptoms of chills or constipation, a dose of "elephant medicine" was, on the advice of a veterinarian, mixed with a quart of liquor and diluted with a few gallons of water. Since her time in Birmingham coincided with statewide prohibition, city officials provided her with confiscated whiskey. Some of the "Shelby corn" was rumored to have found its way into Todd's throat, too. Some say he was routinely seen in an inebriated state, but only one specific incident made the newspapers. One afternoon in early 1934, Todd was under the influence when he clambered onto Miss Fancy's back for a ride up the hill. A resident noted their behavior and summoned the police. They made an unsuccessful attempt to arrest Todd, but were discouraged by the elephant's protests. The best they could manage was to send the pair on their way back to the zoo to sleep it off. 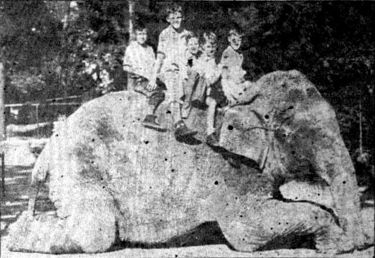 Miss Fancy outgrew the elephant house constructed for her and had to drop to her knees to pass under the door. Nevertheless, she spent most of the winter indoors, heated by a small stove. Her outdoor pen was enclosed by an iron railing during the day. She was sometimes permitted to graze on the mountainside. Todd also saw to Miss Fancy's regular grooming. She was treated to a cooling shower every other day during the summer and given the full soap-and-water scrub, followed by a brushing of five gallons of neatsfoot oil twice a year — on her birthday in October and again in Spring. Her toenails were rasped smooth at those times, and her tusks were cut back to nubs every couple of years to limit the amount of damage she could do on the loose.

Twice a year she would suffer a "period of madness" that lasted about 48 hours, during which Todd remained nearby and she was restrained by leg irons at night. On at least twelve occasions she broke loose from containment and wandered the streets of Avondale, Woodlawn and Forest Park, sampling the delights of kitchen gardens and peeping into windows. She was almost always a gentle presence, easily coaxed back to the park with the lure of food. On at least two occasions, though, she caused damage to property. Once, in 1925 she knocked over the park's cookhouse and kicked over a couple of water hydrants before heading up the hill. Todd caught up with her in Mountain Terrace and coaxed her back to the zoo. Repairs cast the city $75. In Spring of 1931 she bolted from her grazing area and barreled through the trees up Red Mountain until she was caught on Overlook Road.

The $4,600 annual expense of keeping the animal menagerie operating led Park Board to suggest closing the zoo as early as 1932. The Birmingham Board of Education declined an offer to take over Miss Fancy's care, as did former Mayor George Ward, proprietor of the Roman-styled Vestavia estate on Shades Mountain. He told the board that "Lions, tigers and elephants contributed to the downfall of the Roman Empire. No elephant will have the opportunity to bring about the disintegration of my Roman empire."

Miss Fancy was ultimately sold, along with the rest of the park's exotic animals, to the Cole Brothers - Clyde Beatty Circus of Rochester, Indiana for a total of $710. Circus crews arrived on November 11, 1934 to accompany the elephant to her new quarters in Peru, Indiana. The first boxcar proved too small for the giantess, and she waited by the rail siding for a larger carriage, which departed the city about 7:00 PM. Todd rode with her, but soon returned to Birmingham and worked in the city's greenhouse. The Cole Brothers soon announced the acquisition of "Frieda", an 8,600 lb. elephant from Birmingham, "which towered over the other three in the elephant row". That name didn't seem to stick, and she toured with the circus as "Bama" in 1935 and 1937.

In April 1939 the circus sold her to the Buffalo, New York zoo, which had been newly expanded with help from the Works Progress Administration. She remained there until her death in 1954.

Miss Fancy was fondly remembered by the children that had seen her at Avondale Park, and featured in stories passed down from generation to generation of her excursions around the surrounding neighborhoods and of her notorious drinking habits. She was also mentioned in Fannie Flagg's novel Fried Green Tomatoes at the Whistle Stop Café.

A diminutive bronze-colored statue was added as a centerpiece of the plaza of the renovated Avondale Park in 2012, but was later damaged by a drunk driver and removed. Ron Council of the Friends of Avondale Park began a fund-raising campaign in early 2014 to commission a new bronze fountain depicting the elephant at full size from a local sculptor. After Council's death, his son, Bryan took over the project. While that campaign continued, the 2012 statue was discovered in storage at Legion Field and a separate campaign was launched to have Mike Chiarito repair and install it on a higher platform on the 40th Street side of the park.

Miss Fancy's image was adopted in the logo of the Avondale Brewing Company and features in the brewery's decor and in the names of products such as "Miss Fancy's Tripel" and "Vanillaphant Porter". She also lent her name to Fancy's on 5th, an oyster bar which was located across 5th Avenue from the park from 2016 to 2020.