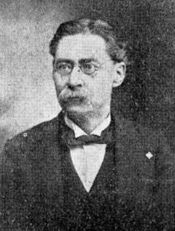 Samuel Ullman (born April 13, 1840 in Hechingen, Germany; died March 21, 1924 in Birmingham) was a hardware dealer, a long-time member of the Birmingham Board of Education, a lay leader at Temple Emanu-El, and a writer whose poem, "Youth," is celebrated worldwide.

Ullman was born to Jacob and Lena Goldsmith Ullman, Jews living under the repression of the German Confederation in Hechingen. They named their first son Samuel after his grandfather, the Rabbi Samuel ben Isaac Ullman and moved before he was a year old to the Alsace region of France, where they could raise him under greater freedom.

In 1850, the family, now numbering six, sailed for America, anxious about the rise of Emperor Louis-Napoleon. On January 17, 1851, after a 56-day voyage, the family arrived in the port of New Orleans, and travelled up the river to Port Gibson, Mississippi where Jacob's brother Isaac had already settled and opened a butcher's shop. In the same year, Samuel began to assist his father making deliveries before school. Later he took charge of buying cattle for the shop.

In 1856, Jacob sent Samuel to Louisville, Kentucky to attend a Jewish school run by Rabbi Bernard Gotthelf. While there, Samuel boarded with a grocer who shared his name and who was one of the founders of the Adas Israel Congregation that founded the school. In all he spent 18 months at the school before returning to his father's business as "first assistant."

Ullman served in the Confederate army during the Civil War. He enlisted in Captain John Taylor Moore's Mississippi militia on May 31, 1861. His unit was attached to the 16th Mississippi Regiment under the command of Captain Carnot Posey and ventured to Virginia that July. Ullman was listed in the roster as a musician in the regimental band. The following May, the 16th Mississippi fell under the command of General Stonewall Jackson for the duration of the Valley Campaign which ultimately drove the Union Army from the vicinity of Richmond. Ullman was wounded lightly at Cross Keys just before the final Seven Day's Battle.

That August, Ullman's regiment accompanied Jackson and Robert E. Lee at Second Bull Run and up into Maryland where they faced off against George McClellan's Army of the Potomac at Antietam. An exploding shell caused Ullman permanent hearing damage. He won his discharge after providing a substitute on November 7, 1862, and returned to Port Gibson.

In 1865 Ullman moved to Natchez, which, surrendering early, had largely been spared from battle and looting. Ullman joined an Orthodox Jewish group called Hebra Kadusha. He was a member of a progressive group that split from that congregation in the Winter of 1865 to establish a reformed congregation called B'nai Israel. Ullman became a lay leader and organized the group's religious school, which held classes on Sundays like their Christian neighbors. He solicited the help of Emma Mayer, and the couple quickly fell in love and were married on May 24, 1867 at her parents' home in Natchez.

Meanwhile, Ullman and his cousin David Laub had opened the Ullman and Laub Mercantile business which steadily grew into an established company. Ullman's family also grew, with the first of eight children born in 1869. By then, Ullman had been elected president of B'nai Israel Congregation and guided the group in the building of a temple, funded in large part by money raised by a Hebrew Ladies' Aid Society which was led by Emma. The new temple was dedicated on March 8, 1872. Ullman served twice as interim lay rabbi and was also active in the Ezra Lodge No. 134 of B'nai B'rith, which he had helped found in 1870. In 1878 Ullman was elected president of the District Grand Lodge No. 7 which represented most of the Southern United States.

Ullman also participated in local politics, running unsuccessfully for Alderman in 1873, and then winning the office in 1876. He served three one-year terms on that Board and also served the Natchez Board of Health during a Yellow Fever outbreak that threatened the populace in 1878. He was not re-elected in 1879. He served as president of the Grand Lodge of B'nai B'rith in 1877. In 1881 he was appointed to the Board of Visitors for the Natchez Institute and the Union School. A few years later he resigned his position to seek opportunities in the growing city of Birmingham.

In 1884 Ullman and his family moved to Birmingham just as one boom period was waning and before the next one took off. He bought a house at 715 18th Street North and opened a store, the Ullman Hardware Company at 1808 and 1810 2nd Avenue North. The business relocated several times and Ullman pursued other opportunities, such as a directorship with Birmingham National Bank, and by founding the Lakeside Land Company.

Soon after his arrival, the Birmingham Board of Aldermen appointed Ullman to the Birmingham Board of Education. As chair of the committee on instruction, he initiated the preparation of written regulations for pupils and staff, compiled a list of approved texts, set teacher salaries, and helped pass a resolution to teach German to all students. He implemented a system of teacher certification and renewed the practice of board members visiting the schools to report directly on conditions.

In 1889 Ullman was elected vice-president of the board. That same year he drafted a resolution which was passed recommending the city establish a public library and that the Board of Education house and manage it. He led the establishment of a corps of available substitute teachers and joined the board in eliminating tuition charges at the high school level. In 1893, at a difficult time for the system, he became president of the board. Due to a drop in enrollment as a financial crisis caused families to move away, Ullman took a voluntary pay cut in order to preserve teacher salaries. The worst year was 1894, when the opening of school was pushed to October, principals' salaries were cut, and high school tuition was reinstated. The system took a loan from the Steiner Brothers Bank to meet payroll.

As the system got back on its feet, Ullman's presence on the board was felt most keenly in the decision to establish a high school for African American students. Ullman had long advocated expanding the curriculum for blacks in order that all children might benefit from the moral "uplift" that came from education. His position was both practical and progressive in the context of turn of the century Alabama. It was also increasingly controversial. In 1901 a new state constitution was drafted which "corrected" the Reconstruction-era constitution by making literacy a qualification for voting -- effectively, and intentionally, disenfranchising the mass of uneducated black citizens. Though the new high school was created successfully, the Board of Aldermen did remove Ullman from his position on the Board of Education. In recognition for his service, Superintendent John Phillips had a new school in Southside named the Ullman School.

In 1888 Samuel and Emma together helped to establish the non-profit Hillman Hospital with 36 beds on a rented floor of the Hughes Building on 20th Street South. Ullman also launched one of the first southern chapters of the American Society for the Prevention of Cruelty to Animals.

Ullman was also an important figure in the early growth of Temple Emanu-El. He served as president of the congregation from 1885 to 1890, laying of the cornerstone of the first Temple building on 17th Street and 5th Avenue North on July 31, 1886. In 1893, following a series of financial and other troubles for the temple, the congregation made the unprecedented move of electing Ullman to serve as lay rabbi. He resigned the position on February 11, 1894.

With his hardware business closed and his rabbinical position behind him, Ullman took a job with the New York Life Insurance Company. He continued on with the Board of Education and other civic directorships. He helped to campaign for a new state constitution as an executive member of the Commercial and Industrial Assocation of Alabama. In 1896, Emma Ullman died of a sudden illness and their 22-year-old daughter Leah took over household duties, including housekeeping for Ullman's successor as rabbi, Morris Newfield. Newfield married Leah in 1901.

In 1902 Ullman traveled across Europe, visiting places he remembered from childhood and being received by Newfield's family in Budapest. He also visited his brother, Marcus, in Natchez - usually coming home in a new suit from Ullman Clothing Store. In 1906, Ullman joined the Newfield household at 2150 15th Avenue South, and joined them on summer visits to Lake Michigan. In 1914 he was present to make the keynote address at the dedication of the new Temple Emanu-El on Highland Avenue.

In his later years, Ullman turned to writing. He contributed numerous letters to the editor of the Birmingham Age-Herald on political issues facing the public. He also began composing verse. Laurens Block, Ullman's nephew and founder of Parisian, provided his uncle with a writing desk and a typist to assist him. When Ullman turned 80 in 1920, his family published his collected poems in a volume entitled From the Summit of Years, Four Score.

Ullman died on March 21, 1924 and was buried at the Emanu-El Cemetery in Northside.

Ullman's story has been told in a biography by historian Margaret Armbrester and in a documentary short film by Judith Schaefer of Marin County, California. The film was screened at the Birmingham Museum of Art during the 2009 Sidewalk Moving Picture Festival.