Croxton's auxiliary was a force of Union troops commanded by General John Croxton which was detached from Wilson's Raid at Elyton on March 30, 1865 with orders to "lay waste to Tuscaloosa's war potential", and then to rejoin the main force along the Centreville Road, or by any other route. Specifically, he was tasked with destroying the city's bridge over the Black Warrior River, factories, mills, military school (the University of Alabama, and, if possible, the railroad between Demopolis and Selma. In addition to eliminating those resources, the detachment served Wilson by occupying scattered Confederate units that might otherwise converge on his main column.

Informants at Elyton, including Judge William Mudd, whose mansion had been commandeered as Wilson's headquarters, had correctly advised the general that he would meet little resistance in Tuscaloosa, mentioning only the "illusive cuss Hylan Lyon," a Brigadier General in Nathan Bedford Forrest's Cavalry. Croxton's detachment was opposed intermittently along its way by Confederate cavalry and in Tuscaloosa by remnants of the Corps of Cadets. When Wilson was made aware of the presence of Forrest's main force on the road to Tuscaloosa, he sent McCook's division along with Emory Upton's brigade as reinforcements. 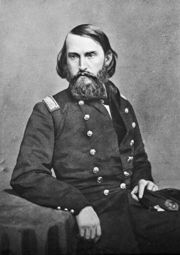 Croxton's command was the 1st Brigade of Edward McCook's 1st Division of Wilson's Cavalry Corps. Its 1,500 soldiers included battle-hardened veterans in the 8th Iowa, 2nd Michigan and 1st Tennessee Cavalry Regiments, the 4th Kentucky Mounted Infantry, and the the Illinois Light Artillery with its "Board of Trade" Battery.

Croxton's auxiliary began their westward march on the evening of Thursday, March 30 along Eastern Valley Road and encamped eight miles outside the town.

On the morning of March 31, Croxton's auxiliary resumed their march, with smaller units detached to destroy public stores at Fort Jonesboro and Thomas Williams' Tannery and Saunders' Rolling Mill near Bucksville. On that same day the cotton mill on Shultz Creek at Scottsville was burned down. As evening neared, the main column learned of the approach of Forrest's Cavalry and moved to intercept them at Trion. They camped for the night just south of Vance Station and proceeded to supply their horses with corn confiscated from Squire John White's cribs. The Confederate division under the command of Brigadier General William Hicks Jackson assaulted the Union camp at daybreak on April 1 and the two sides engaged in a running battle. Croxton's unit counted two officers and 30 enlisted men killed or wounded and another 30 captured, along with the loss of 150 horses. Jackson's side suffered only one fatality, a Tennessee soldier who succumbed to his wounds at White's home and was buried in the vicity. Jackson's attack forced Croxton to turn his march to the north, across rough terrain. The brigade eventually crossed the Warrior River at Johnson's Ferry on Black Rock Shoals near present day Bankhead Lake before turning back southwest toward Tuscaloosa.

During their approach to Tuscaloosa, Croxton's forces captured all the men and boys they encountered that looked capable of racing ahead to inform the city of their route. They prepared to make camp at Deason's Ford on the North River (now submerged under Lake Tuscaloosa) on the afternoon of April 3. The troops were ambushed there by local militia and Croxton determined to push on along Watermelon Road and occupy Tuscaloosa that evening. While crossing Snow's Mill Creek they tried to muffle the sound of their horses' hooves with straw, but W. G. B. Pearson discovered the invaders and raced to warn the home guard at the Warrior River Bridge to pull up the floorboards. Soon the bell at Northport Methodist Church was tolling the alarm.

Main article: 1865 destruction of the University of Alabama

1859 photograph of the University of Alabama Rotunda

Confederate Major Aaron Hardcastle, in command of the post at Tuscaloosa, had expected an attack from the west and stationed only a dozen or so guards at the bridge. Those men exchanged fire with the advancing Union column, but were soon turned back by the overwhelming force. Croxton's men repaired the bridge and continued their advance, burning Sage Olmsted's hat factory on the riverbank along their way. The retreating home guard, meanwhile, set a "tax in kind" storehouse containing foodstuffs to the torch, to prevent the supplies from benefiting the invaders.

With the aid of spies, Croxton's men located and commandeered artillery and wagons stored at the Baird & Hunt Stables. Men attending the wedding of James Carpenter to Emily Leach at the home of her parents were taken captive, but the ceremony was allowed to continue. As the force crossed the bridge, Pat Kehoe, a supervisor at Bryce Hospital, sounded the alarm there and at the campus of the University. Math professor and Commandant James Murfee assembled the Corps of Cadets and marched them into the city to confront Croxton's auxiliary. Realizing the overwhelming superiority of the Union force, University president James Garland issued an order to Murfee to retreat. After exchanging a few volleys the Cadets returned to the campus, and from there continued to Marion where, having learned of Lee's surrender, they disbanded.

Mayor Obediah Barry and Father William McDonough jointly surrendered the city of Tuscaloosa to the United States Army on Tuesday, April 4. As ordered, a portion of the brigade, led by Colonel Thomas M. Johnston, proceeded to the University campus to destroy it. University librarian Andre Deloffre, claiming immunity as a citizen of France, attempted to dissuade the officers from burning the Rotunda containing the library. The officers sought clarification from Croxton back his headquarters in the Charles Fiquet residence in town before proceeding. One volume, an 1853 edition of the Koran, was saved from the fire and later returned to the library.

Confederate Major M. C. Burke ordered a powder magazine destroyed to prevent its confiscation. The Observatory and president's mansion were spared at the pleading of the wife of former Governor Reuben Chapman and Mrs Garland, respectively. Bryce Hospital was not damaged, though the institution's horses and wagons were taken. Probate Court judge Moses McGuire salvaged the court's records by having them hidden in Thomas Clinton's plum orchard and Alfred Skelton's plantation outside town.

In addition to the campus buildings, William Foster's nearby Niter Plant, the Leach & Avery Foundry, Foster's Tannery and two enormous cotton warehouses were destroyed. Some reported looting by Union troops, including the theft of $1 million of CSA funds from J. H. Fitts' office, and even the desecration of mausoleums at Greenwood Cemetery.

With his orders accomplished and information that Jackson's Cavalry was massing for a counterassault, Croxton regrouped to march away from the city. They crossed back over the bridge to Northport. The fire set to destroy the bridge behind them stranded one company, which was forced to detour by way of Sanders' Ferry south of the city.

In Northport the troops set fire to W. L. Christian's hat factory and broke into Robert Maxwell's general store for supplies. They proceeded toward Selma along the Columbus Road through Coker and spending the night on April 6 in camp near Romulus. The next day they proceeded through Pleasant Ridge and Lanier's Mill on the Sipsey River before learning that Forrest's 3000-man corps was entrenched for an ambush on the road ahead.

With the mill in flames behind them, Croxton's auxiliary reversed course back toward Northport. The 6th Kenucky, marching as rear guard, was harried by cavalry commanded by General Wirt Adams, resulting in the loss of men and ambulances. After reaching Northport, Croxton spent the night at Bill Hamner's boarding house, then set course up the Byler Road. According to one story a group of soldier's learned of a cache of gold belonging to John Prewett hidden in a cave and split the $26,000 among themselves.

On April 11 Croxton's auxiliary marched through Windham Springs to Wolf Creek in Walker County. By this point the lack of communications with Wilson's main column had left Croxton unsure of how best to proceed.

They turned eastward, marching through Jasper on April 12 and reaching Mt Pinson in Jefferson County on April 19. With many bridges and small farmsteads already destroyed, the days were marked by difficult crossings of swollen rivers and creeks, compounded by sparse rations. At Pinson they destroyed David Hanby's foundry and niter works at Turkey Creek Falls. While camped, they learned from Confederate deserters that Wilson's troops had completed their operations in Selma and were moving eastward toward Montgomery on their way to Columbus, Georgia.

Croxton anticipated encountering Wilson along the route and turned eastward from Trussville and crossed the Coosa River. The auxiliary skirmished with a meager guard at Talladega and made camp there on April 22. Croxton was informed there of a Confederate supply depot to the north at Blue Mountain Station, stocked with goods that had just been evacuated from Selma. It was guarded by Brigadier General Benjamin Hill. He weighed the opportunity to resupply against the possibility of diminishing their ammunition stores in another fight. As it happened, Hill's force was greatly depleted by deserters and the auxiliary commandeered the Confederate stores with little effort. They also destroyed the Oxford Iron Company's furnaces and bridges on the Alabama & Tennessee River Railroad.

Croxton's men continued marching southeast, burning a cotton mill in Daviston in Tallapoosa County and reaching Blue Ridge on the Tallapoosa River on April 24. By then the federals had come across many Confederates paroled from the Army of Northern Virginia after Lee's surrender at Appomattox Court House on April 9. The auxiliary crossed into Georgia and camped near Carrollton on April 25. From there they were able to continue easily to rejoin Wilson's command, which had occupied the city of Macon for several days, on April 29.

On June 29 Wilson wrote in his official report that, "The admirable judgment and sagacity displayed by General Croxton throughout his march of over 650 miles in thirty days, as well as the good conduct and endurance of his command, are worthy of the highest commendation."

Accounts by local residents tend to highlight stories of looting and destruction which are absent from the official U.S. Army records. Those types of stories probably contain much truth, but also reflect the bitterness experienced by the defeated and the low opinions and fearsome expectations about Yankee invaders which had long been cultivated among the population.

As reparation for the destruction of the University campus, the United States government granted 46,000 acres of federal lands to the Board of Trustees in 1884. On the advice of state geologist and former cadet Eugene Allen Smith, the board selected land in the Warrior Coal Field, primarily in Walker, Jefferson and Bibb Counties, the profits from the lease of which are still used to benefit the University's Tuscaloosa campus.