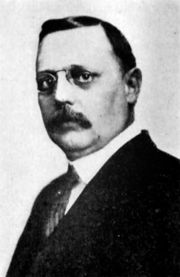 William Proctor Gould Harding (born May 5, 1864 in Boligee, Greene County; died April 7, 1930 in Boston, Massachusetts) was president of the First National Bank of Birmingham and chaired the Federal Reserve from 1916 to 1922.

Harding was the son of civil engineer and Alabama & Chattanooga Railroad superintendent Horace Harding, and the grandson of portrait painter Chester Harding. He attended private school and graduated from the University of Alabama at age 17 in 1881 and also completed a business course from the Eastman School of Business in Poughkeepsie, New York. He began his career at J. H. Fitts & Company's Tuskaloosa Bank in Tuscaloosa. He moved to Birmingham in 1886 and worked as a bookkeeper first for Robert Jemison Sr, and then at the Berney National Bank. He was promoted to cashier in January 1894 and also served as a financial adviser to Congressman Oscar Underwood.

As a member of the board of directors, he was instrumental in the bankruptcy reorganization of the Southern Steel Company in 1909. He also served on the boards of the Birmingham Railway, Light & Power Company and the Bessemer Coal, Iron & Land Company. His counsel was instrumental in the Tennessee Coal, Iron & Railroad Company's development of Fairfield, and he was also an investor in the construction of the Tutwiler Hotel in 1913-1914.

Harding married the former Amanda Moore on October 22, 1895 and had three daughters with her. He constructed an imposing residence at Glen Iris Park in 1904. Amanda Harding committed suicide in 1910. The fact that Alabama Consolidated Coal & Iron Company president Guy Johnston was found dead of a self-inflicted gunshot wound on the same day provoked rumors of a pact between them.

In August 1914 Harding was appointed by President Woodrow Wilson to serve on the Federal Reserve Board. He became its second governor (chair) two years later. From 1918 to 1919 he also assumed the duties of manager of the War Finance Corporation.

Harding traveled to Havana, Cuba in 1922 to advice President Alfredo de Zayas on his government's finances and accounting practices. He was made president of the Boston Federal Reserve Bank in 1923 and wrote a book on the history of the Federal Reserve System. He died at his home in the Algonquin Club in 1930. Following funeral services in the chapel of Boston's Forrest Hill Cemetery, his remains were sent back to Birmingham for burial.

Harding was inducted into the Alabama Business Hall of Fame in 1986.