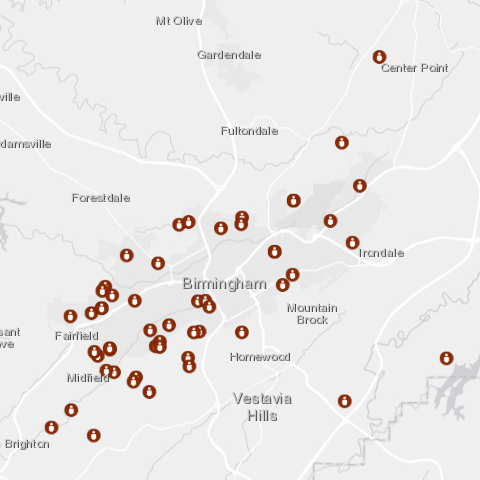 Map of Birmingham homicides in 2014

This is a List of Birmingham homicides in 2014. It includes homicide cases occurring within the city limits during the calendar year. Note that a "homicide" refers to the cause of death as determined by a medical examiner, not to the commission of the crime of murder as charged by police and prosecutors.

Of the 63 reported homicides, suspects have been identified in 41 cases, apprehended in 36, and charged in 28. Convictions have been obtained in 8 cases, including 1 case where a jury reduced the charge and 2 in which the defendants pleaded to a lesser charge. Charges were dismissed in two cases when key witnesses did not appear, and in another when a grand jury failed to indict. Two other trials ended in acquittal. Suspects in three deaths killed themselves. Eight homicides were ruled justifiable by prosecutors, including one officer-involved shooting, and four other deaths were caused by reckless driving rather than malice aforethought. The police department therefore acknowledged 54 chargeable homicides, of which 52 were classified as murders. At the end of June, the Department claimed to have closed 19 of 23 cases for an 84% clearance rate.

At least fifty-three of the reported homicides were shootings, five were stabbings, and four resulted from vehicle collisions. Nineteen took place on the streets, nineteen inside homes, six at apartment complexes, ten at businesses, two at a motorcycle club, eight in the front yards of houses, and one at a city park. Forty were reported in the West Precinct, twelve in the East Precinct, five in the South Precinct and six in the North Precinct. Four incidents resulted from love triangles, nine originated as domestic arguments, eight occurred during robberies, two occurred following drug transactions, six were part of ongoing disputes, one arose from accidentally knocking a motorcycle over, one started as a dispute during a game, two were carried out by a disgruntled former coworker, three were the result of reckless driving, and one was the result of a stray gunshot. Fifty-two victims were male and eleven were female.

The murder of K. D. Hardy, a well-known motivational speaker who had turned away from crime, prompted the Birmingham City Council to pass a resolution of condolence, and for Councilman Jay Roberson to promise that, "[w]e're going to find out who did this senseless act to Kerry and we're going to make sure that justice is served."

The spate of homicides occurring over the Labor Day weekend and following days alarmed residents and some city officials.