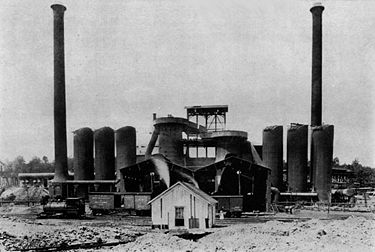 The Oxmoor Furnaces in 1885

The Oxmoor Furnaces (sometimes called the Ironton Ironworks) were a pair of blast furnaces operating near Shades Creek in the Oxmoor Valley from 1863 to 1865, and, with some interruption, from 1873 to 1927. They were the first blast furnaces within Jefferson County and helped establish the commercial viability of pig iron production in the Birmingham District.

John T. Milner and Frank Gilmer had scouted the location for a proposed iron furnace, which would be accessible to their planned Alabama Central Railroad (later the Louisville & Nashville Railroad). A charter was granted to the Alabama Arms Manufacturing Company by the Confederate States of America in 1861, but insufficient capital was raised to begin construction. With additional investment from the Confederate Government and local landowners including William Mudd, the Red Mountain Iron and Coal Company was incorporated on November 5, 1862 and work proceeded. Though some early accounts give the name of the operation as "Ironton", Milner and Gilmer are credited with choosing "Oxmoor" for the Scottish estate of that name.

The first furnace at Oxmoor was blown in, using charcoal as fuel and red ore from Baylis Grace's Eureka Mine, in November 1863. The two stone furnaces at the site were built by William McClane and blown in under the supervision of Moses Stroup, who had been overseeing operations at the Tannehill Ironworks since 1855.

Oxmoor and other early furnaces in the Birmingham District supplied the Confederacy with pig iron during the Civil War. The furnace stood 32 feet high with 9 or 10 feet in the bosh. Its estimated capacity was five or six tons per day, for which 60 foundrymen and hundreds of woodcutters, haulers and charcoal burners (typically slaves) would be needed. Despite a shortage of cash, the furnace masters kept the iron flowing at high levels. Stroup reported that the full operation was capable of producing up to 20 tons of iron per day. Most of the iron produced at Oxmoor was used for cannon, balls, railroad spikes and other materials. Oxmoor-Irondale Road connected the site, and the Cahaba Iron Works in Irondale to the Selma, Rome and Dalton Railroad, which carried it to Selma Arsenal and Gun Works or Noble Brothers Foundry in Rome, Georgia.

The furnace was destroyed by soldiers under the command of Colonel J. S. Casement on May 22, 1864. The offices, mills, and houses were burned to the ground and Stroup lost three sons and fled to Montevallo. The site was again targeted during Wilson's Raid, which destroyed the remaining works on March 28, 1865. Pioneer chronicler Mary Gordon Duffee was received at the site by the family of Stroup's son-in-law shortly after the skirmishing as she made her way on foot back to Duffee Mountain at Blount Springs. 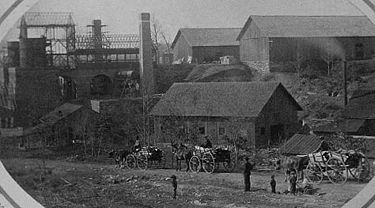 The Oxmoor Furnaces (called the "Ironworks at Ironton") c. 1873

After the war, Daniel Pratt and James Sloss bought a controlling interest in the Red Mountain Coal and Iron Company and reorganized as the Eureka Mining and Transportation Company. Pratt placed his son-in-law, Henry F. DeBardeleben, in charge of the Oxmoor site. DeBardeleben had the furnace rebuilt and a second furnace added in the Fall of 1873. The new furnaces, built atop the ruins of the originals, were 60-feet by 12-feet and incorporated iron bells and hoppers. They were designed for a daily capacity of 25 tons each, but, due to inexperienced operators, rarely exceeded 10 tons per day. The company erected the Oxmoor Hotel for the convenience of visitors to the site. The Panic of 1873 brought operations to a standstill.

In 1875 James Thomas and Company leased the site, but never got much back out of it. The prospects for commercial iron production in the Birmingham District appeared bleak. That year, a committee of Birmingham investors, headed by Frank O'Brien, organized the Experimental Coke and Iron Company to establish the commercial viability of iron made from local resources. In what has been called the "Eureka Experiment", coal from several area mines was collected and processed into coke for fuel. The No. 2 Oxmoor furnace was modified, and, on February 28, 1876 it became the first in the District to produce iron from locally-obtained ore and coke. J. H. Woodward observed the experiments at the request of his father, but decided that the time was not yet ripe to develop their coal properties in the District.

Based on the experiment's success, the No. 1 furnace was rebuilt in 1877, sixty feet tall with an iron stack. O'Brien's contracting company erected coke ovens at the Helena Mine site, and eight span of oxen hauled the boilers from the moribund Irondale Furnace to Oxmoor. Despite these investments, the quality of the iron produced could not match that made at the newer, larger Alice Furnace in Birmingham. Theophilus Jowers, a foundryman at Oxmoor, moved to Birmingham to work at Alice Furnace, where he died in a grisly accident in 1887.

The furnaces were rebuilt again in 1885 and 1886 to a height of 75 feet each and a combined output of 250 tons per day. The furnace operation was taken over by David Sinton of Cincinnati, Ohio in 1886. He sold them back to the DeBardeleben Coal and Iron Company on October 18, 1890, which then sold them to the Tennessee Coal, Iron and Railroad Company on June 1, 1892. TCI continued operating at Oxmoor, rebuilding the furnaces in 1899 and 1902, at which point they were capable of producing 350 tons daily. TCI idled the furnaces on October 26, 1907, just before being acquired by U. S. Steel.

As TCI's Ensley Works, and later the Fairfield Works came into production, the furnaces at Oxmoor were left idled. Wartime demand necessitated the relighting of Oxmoor Furnaces on February 21, 1913. After the war, one of the two stacks was abandoned. The second furnace continued to produce iron until May 1927. The stacks were dismantled in 1928.