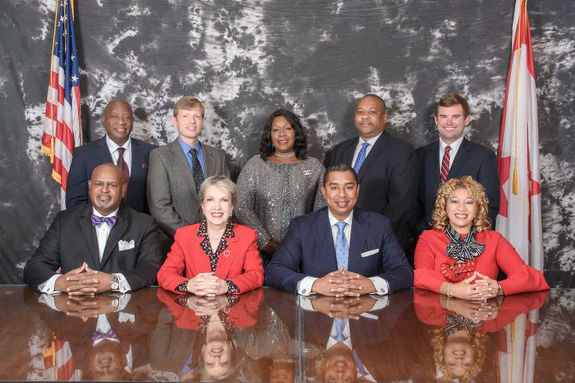 After the council members were sworn in on October 24, 2017, Valerie Abbott was elected President, with Jay Roberson as President Pro Tempore. After Roberson stepped down, William Parker was elected to serve the remainder of his term as Pro Tem.

On October 22, 2019, the council elected William Parker as its new president, with Wardine Alexander as the council's president pro tempore.

Council members are assigned to one or more committees, and also meet with the "Committee of the Whole". Prior to restructuring by President William Parker in March 2020, those assignments were:

Parker altered the committee structure and assignments in March 2020. His changes were voted on without discussion on March 10 and passed by a 4-1 vote with one abstention and 3 not present. The new committees are:

Council member Jay Roberson stepped down in September 2018 to move to Alabaster after his wife accepted a job with Alabaster City Schools. Sheila Tyson and LaShunda Scales were elected to the Jefferson County Commission in the 2018 general election and therefore resigned their seats that November.

In their October 16 meeting the Council deadlocked 4-4 on whether to appoint Wardine Alexander or Lonnie Malone to Roberson's former District 7 seat. On October 30 Stephen Hoyt changed his vote and Alexander was appointed on by a 5-3 majority.

The 2019 Birmingham special election, held on October 18, 2019, resulted in all three appointees— Woods, Smitherman, and Alexander— holding their seats until the 2021 Birmingham municipal election.