Downtown revitalization is an ongoing series of large-scale efforts aimed at increasing active use of Birmingham's downtown area, especially in the wake of the negative effects of suburbanization and white flight in the post-World War II era.

Early efforts for revitalization were coordinated through the Downtown Improvement Association, formed in 1957. That group proposed a beautification program for 20th Street North, and also sought to relieve traffic congestion, parking shortages and other impediments to navigating downtown by automobile. In 1959 they lobbied the Birmingham City Commission to fund studies for new routes "Over the Mountain", resulting in the Red Mountain Expressway and the massive Red Mountain cut. The group helped push for creation of the Birmingham Parking Authority which constructed several multi-level parking decks and surface lots in the downtown area. 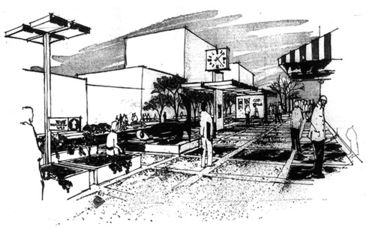 Meanwhile another group, the Downtown Action Committee, was launched by Ferd Weil and Birmingham News vice-president Vincent Townsend in 1961. The committee sponsored numerous promotional campaigns to entice shoppers to the downtown area, including Christmas decorations, a Birmingham Christmas parade and the marketing slogan "It's Nice to Have You in Birmingham". Later Downtown Action Committee projects included a Parking Meter Santa Claus, a Sidewalk Art Show, and the Downtown Farmer's Market under the Elton B. Stephens Expressway at 1st Avenue North.

The Birmingham Green plan, developed through a committee of the Downtown Improvement Association, combined private and public funding for improvements to 20th Street North as a pedestrian shopping street. Though many private business pledges never came through, public investment from the city and from the US Department of Housing and Urban Development allowed the $1.9 million streetscape project to be realized by Fall 1973. Some building owners took the opportunity to invest in their own properties, such as the renovation of the Nabers, Morrow & Sinnige building.

In 1962 the Downtown Improvement Association created Operation New Birmingham as a subsidiary committee charged with preparing and implementing a master plan for structural and economic redevelopment of downtown, dubbed the "Design for Progress".

The plan was created by Harland Bartholemew & Associates of Atlanta, Georgia with assistance from the Birmingham League of Architects. That plan, which debuted in 1965, envisioned major changes to the city center, with plazas and bridges creating a continuous raised pedestrian level, segregated from street traffic below. The plan also called for a historically-themed entertainment district on Morris Avenue and for a major new multi-venue performing arts and convention center, which was eventually developed as the Birmingham-Jefferson Civic Center.

Real estate developer William Engel put together a proposal for a $10 million federal office plaza project in the spirit of the Design for Progress. It would be located near the new Birmingham Post Office on the eastern end of downtown, and necessitated the demolition of the unused Birmingham Terminal Station. Though preservationists rallied to prevent the destruction of the landmark Beaux-Arts style station, the spirit of modernism prevailed. The office plaza project, however, was never realized. 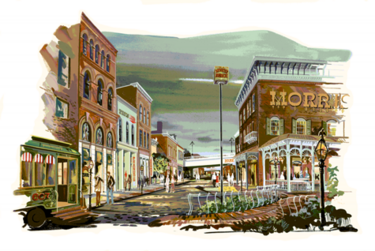 Preservationists had more luck with the development of Old Town Uptown, a realization of architect Bob Moody's vision for an entertainment district modeled on Gaslight Square in St Louis, Missouri and Underground Atlanta in Atlanta, Georgia which filled a number of vacant warehouses on Morris Avenue with nightclubs and restaurants like Diamond Jim's, Oaks Street and Victoria Station. Though successful, the district's attractiveness proved vulnerable to fear after a visiting businessman was kidnapped, robbed and murdered in 1977.

While many elements of the Design for Progress never materialized, the plan was credited with triggering the development of several of Birmingham's tallest skyscrapers which were constructed in the downtown financial district in the 1970s and 1980s.

Costa and his development partner Nelson Head worked on several projects related to those plans. The City entered into a development agreement with Raymond Gotlieb's Metropolitan Development Inc. for a 28-story Westin hotel and office complex on Block 60. Gotlieb was unable to secure options on enough property to attract investor and the city declined to use its condemnation powers to secure the development. The Clark Building, which became vacant during the controversy, was rehabilitated in 1998 for Lightfoot, Franklin & White attorney's, helping further a late 20th century trend for historic preservation as a redevelopment tool.

Meanwhile, favorable economic conditions helped the city to upgrade its skyline with several high-rise office towers. Development of the AmSouth-Harbert Plaza in 1989 brought the first upscale indoor shopping mall and food court to downtown. It also housed a Parisian department stores, the last of the city's once flagship stores to operate in the city center.

Efforts to bring reinvestment to the western side of downtown through the creation of a Civil Rights Museum gained steam in the late 1980s despite two unsuccessful bond referenda which would have funded development. Proponents persisted with plans for a Civil Rights District centered on Kelly Ingram Park and the new Birmingham Civil Rights Institute along with Carver Theatre and the 16th Street Baptist Church. The district has since become a major destination for heritage tourism and national fund-raising efforts have enhanced its landmarks. 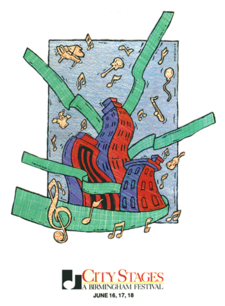 By the late 1980s, the idea of coming into downtown Birmingham from the suburbs for entertainment was becoming quite foreign. With prompting from the Greater Birmingham Convention and Visitors Bureau former State Senator George McMillan created a sensation with his City Stages annual 3-day music festival at Linn Park, which began in June 1989 and soon grew to encompass several surrounding blocks. The people-packed streets buoyed spirits of downtown lovers, but the growth of competing festivals and debts spelled the end of the event after 2009.

The tenure of the festival witnessed a few major development projects downtown, including the renovation of the former Loveman's store for the McWane Center and a major expansion of the Birmingham Museum of Art. It also inspired a number of other downtown festivals such as Sidewalk, Taste of 4th Avenue Jazz Festival, Schaeffer Eye Center Crawfish Boil, ArtWalk and Dia de los Muertos.

In the 1990s, Operation New Birmingham, which had begun as the subcommittee charged with preparing the Design for Progress and also absorbed the post-Civil Rights Movement duties of fostering communication across the racial divide, emerged as the leading voice for efforts to revitalize downtown commercial buildings.

The group sponsored the Magic City Art Connection outdoor art festival at Linn Park, researched vacant properties and the demand for downtown business and parking, and publicized a "12 Most Wanted" list of downtown buildings in need of renovation and rescue.

MAPS and the domed stadium debate

A number of sporting events formerly hosted in Birmingham began bypassing the city in the 1980s and 1990s due to the age and condition of Rickwood Field and Legion Field and the limited size of the BJCC Coliseum. Southeastern Conference chairman Roy Kramer and Gene Hallman of the Alabama Sports Foundation became the most vocal cheerleaders for a new sports venue which would most likely be developed near the BJCC.

Hallman and surgeon Larry Lemak funded a study of how best to plan for such a venue, resulting in a much broader proposal, dubbed the "Metropolitan Area Projects Strategy" (MAPS) in 1998. Like its predecessor in Oklahoma City, Oklahoma the proposal offered a long list of projects that could be funded with a small tax increase, in this case to sales and lodging taxes in Jefferson County.

Despite those other aspects of the MAPS plan and wide-ranging rhetoric of both sides in the debate, the vote was popularly viewed as a referendum on a domed stadium. It failed, with most of the "no" votes coming from outside Birmingham proper. Despite that failure, many of the proposed projects eventually moved forward, some of them with funding obtained through Mayor Larry Langford's city-wide sales tax hike, the Birmingham Economic and Community Revitalization Ordinance, which took effect January 1, 2008.

After the decline of the Morris Avenue entertainment district, and while ONB was focused on the City Center, efforts got underway in Five Points South and Lakeview to promote revitalization through new bars and restaurants. Frank Stitt's Highlands Bar and Grill anchored evening activity in Five Points, bolstered by redevelopment of Pickwick Plaza by Donald Kahn in 1987 and the New Studio Arts Building built by Tom Hinton in 1994.

Meanwhile Sloss Real Estate's Cathy Sloss Jones marketed 29th Street South as another entertainment district anchored by Lou's Pub and the Bombay Cafe in the renovated Avon Building. The district was extended to 1st Avenue South with the planned redevelopment of Pepper Place as a "design district" with antique shops and design showrooms. Marketing of the district got a boost with the institution of the Pepper Place Saturday Market in 2000 and construction of 29 Seven apartments and retail in 2006.

One priority of the Birmingham Economic and Community Revitalization Ordinance was the creation of a new hotel and entertainment district to support the convention and trade show business of the BJCC. The tumultuous process eventually resulted in the development of a new Westin Birmingham and a scaled-back Uptown district of restaurants, filling a gap in badly-needed services for BJCC visitors.