There are numerous references, some fictional, some not, to an underground river flowing beneath downtown Birmingham. Jones Valley is an anticlinal valley, formed by the axial weathering away of Carboniferous Period rock layers, exposing older Cambrian Period formations. Surface streams no longer follow the length of the valley, having found outlets through the northern and southern walls, but subsurface water likely continues to pass below the valley floor through soft beds of sedimentary limestone karsts and dolomites. Slightly acidic runoff can accelerate the formation of caverns, which can become sinkholes if the ground above collapsed into them.

The movement of water in subterranean channels is common, and the presence of underground water flowing beneath downtown Birmingham is well-established. A hydrologic investigation by the United States Geological Survey in the 1950s and 1960s reported that, "[n]ormal annual precipitation of 53 inches falls mostly as rainfall and occasional light snow and is the source of all ground water in the Birmingham district."

UAB geology instructor George Brockman and Geological Survey of Alabama geologic hazards expert Sandy Ebersole have attested to the presence of a below-ground stream downtown, however it is not clear whether any large, continuous channels, such as are envisioned by the phrase "underground river" have ever become established in the downtown area. Several, "large tubular-shaped solution channels lined with thin deposits of calcite and pyrite," were discovered during operations at the Muscoda No. 5 Mine in Bessemer. Those channels formed through the weathered limestone, with one estimated at about 15 feet high and 20 feet wide. In general, there is no geological evidence that the floor of Jones Valley covers any features that are unusual for the region. 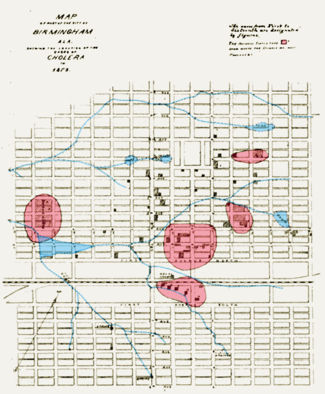 Mortimer Jordan Jr's map of the downtown area showing surface water and incidences of cholera during the 1873 epidemic.

Mulhatton's "Underneath Us" as printed in the Birmingham Iron-Age" on August 28, 1884 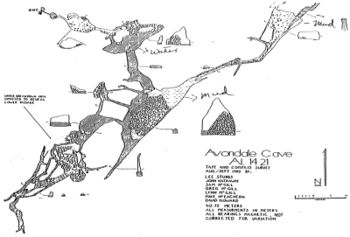 Also in the mid-1880s, an opening into a cavern behind the spring at Avondale Park became accessible and tempted curiosity-seekers who reported observing the 20-foot-deep crystal clear stream below the ground.

A particularly fantastic story, printed in the Birmingham Age-Herald in 1886, told of a pair of explorers who explored the "underground river" from a small boat, drifting under the city of Birmingham, listening to the roar of furnaces and the rumble of trains. At a small landing they discovered Steve Renfro's counterfeiting operation. After dozing off, they awoke just before they emerged into the Warrior River above Tuscaloosa.

At one point a load of dye was introduced to the underground stream and its stain became visible later in Valley Creek near Rickwood Field.

The entrance was sealed in the 1930s, but re-discovered later. A group of trained spelunkers mapped as much of the flooded cavern as they could in 1983, finding most of the passages disappearing quickly into mud-filled crevices.