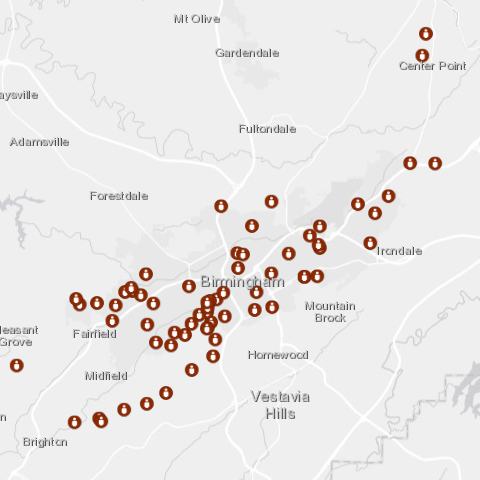 Map of Birmingham homicides in 2009

This is a List of Birmingham homicides in 2009. It includes homicide cases occuring within the city limits during the calendar year. Note that a "homicide" refers to the cause of death as determined by a medical examiner, not to the commission of the crime of murder as charged by police and prosecutors.

Of the 72 reported homicides, suspects have been identified in 51 cases, apprehended in 45, charged in 41 and convicted in 7 (5 on reduced charges). 1 suspect was found not guilty, 4 suspects killed themselves, and 2 deaths were ruled justifiable. On December 31, the Birmingham News reported that the killers remained free in only 19 of 71 slayings.

At least 54 of the 72 reported homicides were shootings, 4 vehicular collisions, 3 stabbings, 3 beating deaths, and 3 cases of child neglect or abuse. At least 10 resulted from the escalation of previous altercations, 1 was due to an accident which occurred while fleeing from a crime, 3 occurred during robberies, 1 was an ambush by thieves on the run, 2 victims were apparently caught in crossfire, 2 deaths were ruled justified as self-defense, 4 were murder-suicides, 2 were the result of attempts to repossess a car, and the other cases had no reported motive. At least 32 deadly incidents occurred on the streets, 20 at private homes, 5 in yards or driveways, 2 in abandoned homes, 4 in parking lots, 5 in businesses and 1 in a park. 62 of the 72 victims were males.

Police chief A. C. Roper led a series of prayer walks in the Graymont, East Birmingham and West End areas. During the walks Roper greeted residents and asked their help praying for God's help in ending crime.

An anti-youth violence event sponsored by the Parents Against Violence Foundation and the Birmingham Park and Recreation Board was held at the Central Park Recreation Center on May 30.

Another prayer walk was held at Southtown Court on July 4 with police officials and members of the Church of the Highlands.

Another prayer walk was held in Wylam on October 17. The annual Survivors of Murdered Loved Ones luncheon was held on November 21. Birmingham Police Chief A. C. Roper and his wife Edith attended and shared stories of the murders of their own siblings.

The "Kevin Felder ordinance", passed by the Birmingham City Council in 2013, was named in memory of the victim of the August 30 stabbing outside Zen.