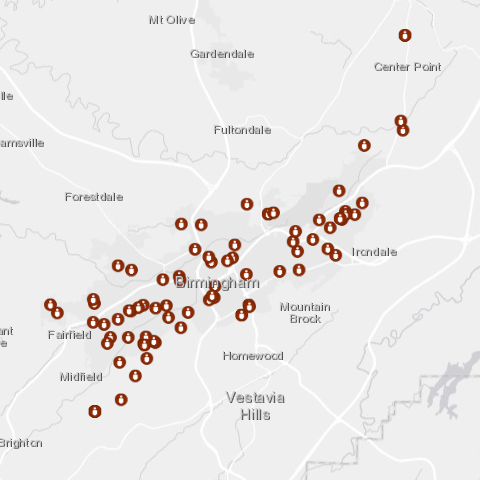 Map of Birmingham homicides in 2008

This is a List of Birmingham homicides in 2008. It includes homicide cases occuring within the city limits during the calendar year. Note that a "homicide" refers to the cause of death as determined by a medical examiner, not to the commission of the crime of murder as charged by police and prosecutors.

Of the 89 reported homicides, suspects have been identified in at least 62 cases, apprehended in 56 and charged in 46. Convictions have been obtained in at least 8 cases and guilty pleas to murder in at least 3 more. 1 of those was a reduced charge of manslaughter following a mistrial. 1 suspect pleaded guilty to manslaughter and 2 in a single incident of vehicular homicide. Four cases were ruled justified with no charges filed (2 of which were police-involved shootings), and 1 was ruled accidental.

At least 64 of the 89 reported homicides were shootings, 4 were stabbings, 3 beating deaths, 3 the result of attempts by police to subdue fleeing suspects and 2 the result of a car crashes. 7 cases appeared to be domestic disputes (including 2 deaths by child abuse), 17 resulted from arguments, 11 appeared to be home invasions or robberies, one a case of mistaken identity, one a struggle following a suspected theft. 3 were police attempts to subdue suspects (2 of which have been ruled justified). The remaining cases had no reported motive. 34 deadly incidents occurred on the streets, 30 inside private homes, 10 in parking lots, 2 at motels, 1 at a nightclub and 1 in a convenience store. At least 63 of the victims were male and 9 were female.

One death that counted toward this year's total occurred in December 2007, but was ruled a homicide by the coroner's office in 2008. Note that the Birmingham Police Department does not count homicides toward the total if they have been ruled justifiable. The Birmingham News keeps those in their running total. Another that occurred in December 2008 was not classified until 2009.

Members of the National Stop the Violence Coalition and Alabama Youth Against Violence staged a rally at Five Points West on January 12, prompted by the rising murder rate. (Bryant - Jan. 12)

Starting with a February 8 rally, Mayor Larry Langford and co-director of the Mayor's Office of Citizen's Assistance Frank Matthews launched a campaign, Plan 10/30, to involve African American men as leaders in turning their communities away from violence. Only black men were invited to the first meeting at Fair Park Arena, which focused on personal responsibility. Later rallies were held for black women on February 29 and for families on April 4. A fourth rally, on April 25 was proclaimed as "It's Time to Pray", with comparisons to the story of Nineveh in the biblical Book of Jonah. Mayor Langford ordered 2,000 burlap sacks to be worn by attendees as an expression of humility and mourning.

Congressman Artur Davis hosted a "Save Our Streets" forum on combating violent crime on March 3 at Birmingham City Hall. Representatives from the Cincinnati Police Department, the New York City's mayor's office, non-profit Third Way and other groups shared their experiences with programs which have been successful in other cities. (Norris - Mar. 4)

The Birmingham Regional Chamber of Commerce sponsored a series of public presentations entitled "No Time for Crime". The talks, given by Birmingham Police Chief A. C. Roper, Jefferson County Sheriff Mike Hale and Colonel Chris Murphy of the Alabama Department of Public Safety, are aimed at fostering public-private partnerships for crime reduction. (Robinson - May 6)

On July 8, following an especially violent Independence Day weekend, the Mothers Who Want the Violence to Stop help a prayer vigil at 5808 1st Avenue South. (Coman - July 8). Shortly thereafter, at the City Council meeting and again at a news conference called by the Southern Christian Leadership Conference, Mayor Langford outlined plans to increase fines against parents for curfew violations. (Stock - July 9). He also proposed a new state law allowing the city to seize cars in which the owner or passengers are found to be carrying a firearm illegally. The curfew was passed by the City Council and takes effect on October 1. A church-sponsored rally at Linn Park on August 30 reinforced the message that parents need to take responsibility for their children's behavior.

Beginning in September a crew from the cable television program "The First 48" videotaped the efforts of Birmingham homicide investigators performing their duties.

on September 20 about 200 friends and family members of homicide victims met for an annual tribute at Boutwell Auditorium organized by the Parents Against Violence Foundation.

On October 18 residents of the Inglenook neighborhood marched around their community praying and singing "Satan, We're Going to Tear Your Kingdom Down" as a demonstration of the power of God. (Ruisi - October 15)