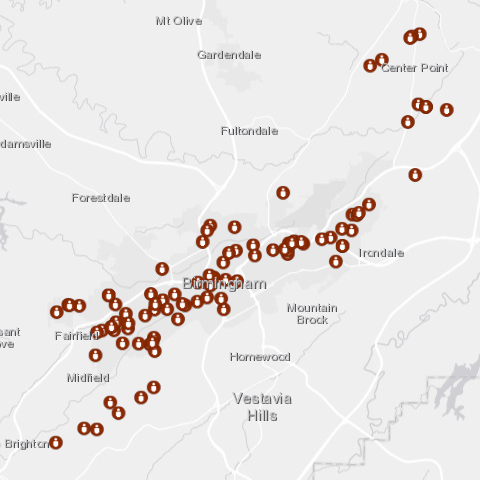 Map of Birmingham homicides in 2016

This is a List of Birmingham homicides in 2016. It includes homicide cases occurring within the city limits during the calendar year. Note that a "homicide" refers to the cause of death as determined by a medical examiner, not to the commission of the crime of murder as charged by police and prosecutors.

Of the 109 reported homicides, ten were ruled justifiable by prosecutors and two were police shootings of armed suspects following car chases. One death was caused by a heart attack suffered during an assault two were charged as manslaughter. One death of a fetus, although chargeable as homicide under state law, has not been classified as such, but another was, based on evident intent. Four accidental deaths, caused by driving under the influence, led to three murder charges and a manslaughter charge. The police department therefore acknowledges 96 chargeable homicides, four of which have been charged as manslaughter and the remaining 92 classified as murders. Suspects have been identified in 70 of those cases, apprehended in 66, and charged in 57. In December Birmingham Police considered 34 of the homicide cases "unsolved" and reported a year-end "clearance rate" of 68 percent. So far, convictions have been obtained in 19 cases, including 6 guilty pleas (4 to lesser charges) and two cases where juries reduced the charges. A related federal conviction was reached in another case. One suspect killed himself before facing prosecution. Five defendants were found not guilty at trial. Charges in three other cases were dismissed.

At least 82 deaths resulted from shootings, six were caused by stab wounds, three from strangulation, four from vehicle collisions, and two from blunt force trauma. At least twenty-seven homicides took place inside homes, thirty-six on the streets, thirteen in yards, thirteen at apartment complexes, three at nightclubs, and nine at other places of business. Forty-one of the 94 homicides investigated as murder were reported in the West Precinct, twenty-five in the East Precinct, none in the South Precinct and twenty-two in the North Precinct. Twenty-one deaths were the result of domestic disputes, thirteen were retaliation or the result of ongoing grudges, sixteen arose from fights, fifteen from robberies, ten from disputes over drugs, and two from police shootings following car chases. One death is thought to have been gang-related. Sixteen homicides had no known motive. Ninety victims were male and sixteen were female (including one trans woman). Two were unborn fetuses.

The victims knew their killers in at least 71 of the 94 chargeable homicides, including the 19 deaths from domestic disputes. Ten of those 19 were killed by spouses, and four by the victim's parents or children. Guns were used in 76 of the chargeable homicides (71 handguns, four rifles and one shotgun).

In the immediate aftermath of the September 11 shooting in Gate City, Housing Authority of the Birmingham District director Michael Lundy announced that the authority would establish the position of Director of Public Safety to create and manage public safety measures in all housing communities.